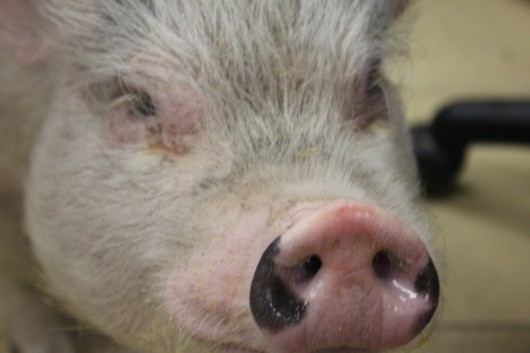 A day after we first reported the New Rochelle Humane Society rescued Payton the pot bellied pig from North Avenue student housing, we’re learning more about how everybody’s new favorite porker ended up in the hands of the Iona College students in the first place.

According to NRHS  shelter manager Dana Rocco, the guys who had Payton in their small backyard on Monday had retrieved the pig from its original Long Island owner over the weekend after reading online that Payton might need some pig placement.  Apparently, Payton and his owner’s dog did not get along. There was even talk of sending the affable guy to slaughter, she says.

“They were trying to do the right thing,” Rocco says.

The students, however, didn’t have a concrete plan of what they were going to do with Payton next, which is when the Humane Society showed up.

Although people with farms have already offered to adopt Payton, the Humane Society is going to first put him in the hands of a pot bellied pig rescue group in hopes that his story will ultimately help other pigs find homes, too.

“If you’re considering a pig as a pet, you really have to do your homework first,” Rocco says, adding the swine can grow up to 800 pounds. “It’s really important to find out what you’re getting into.”

0 Comments
Inline Feedbacks
View all comments
Previous article
Coming up: At CNR- What it Means to be Human
Next article
Cool Finds: Happy as a Clam in Eastchester