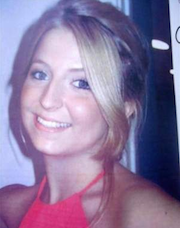 Update: Police say they believe the missing Indiana University sophomore from Edgemont (Greenburgh) could be the victim of foul play.

“We certainly feel like there could be foul play involved,” Bloomington police Lt. Bill Parker said at a press conference Tuesday. There have been no breaks in the case, however.

According to CBS News, police have a cell phone, keys and purse belonging to Lauren Spierer, a 2009 graduate of Edgemont High, though they don’t know whether Spierer simply forgot them after a late night out.

Spierer’s disappearance has mobilized communities from Bloomington to Westchester. A Scarsdale synagogue that the Spierer family attends is holding a prayer vigil for her Tuesday night.

An Indiana University student from Greenburgh remained missing this morning, four days after she was last seen, as her parents took to the national airwaves to plead for help finding their daughter.

According to LoHud, Lauren Spierer, a 20-year-old fashion student, has not been seen since 4:15 a.m. Friday morning a few blocks from her Bloomington apartment.

Spierer’s parents, Robert and Charlene, are in Bloomington, searching for their daughter, along with Bloomington police and a growing group of volunteers.  The couple appeared this morning on NBC’s “Today” show asking for help.

“She didn’t just disappear. Somebody knows where she is,” Charlene Spierer said on the show.

The Spierer family has set up a website with information at www.iuhillel.org.