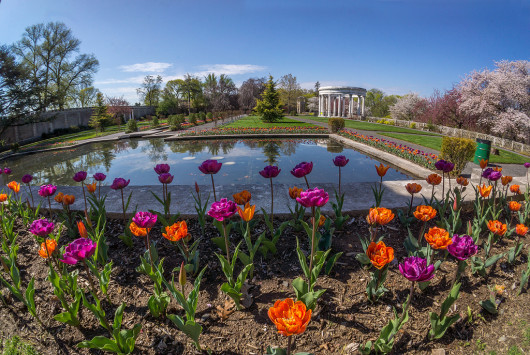 The restoration of Samuel Untermyer’s glorious gardens in Yonkers is a sight not to be missed. Long forgotten and in ruins, today the Untermyer Park and Gardens is a City of Yonkers public park and a veritable paradise of 43 acres overlooking the Hudson River.

The Untermyers, working with Beaux-Arts architect Welles Bosworth (known for his designs of Rockefeller’s Kykuit just up the river), created several different gardens including a walled Persian garden, temples, pools, mosaics, an open-air amphitheater, woodland paths, and a cascading stairway, copied from the Villa D’Este on Lake Como in Italy, featuring a dramatic view of the Hudson and the Palisades.  During the 1920’s and ’30’s, ten’s of thousands visitors came to Yonkers to see the gardens, which were considered one of the greatest gardens in the world.

After Untermyer’s death in the 1940’s, the gardens began a long decline. The City of Yonkers took over a portion of the gardens, but until 2010 when the the Untermyer Garden Conservancy was formed, the gardens were basically in ruins. Today, after 3 years of intense work, key features of the gardens have been lovingly recreated. Public tours take place on weekend days from April to October. (Children twelve and under are free.) The park is open every day with limited hours for the Walled Garden.

A Summer Solstice Sunset Soiree will take place on the evening of June 19th. Details and how to purchase tickets here.

The Untermyer Performing Arts Council’s 2014 Worldfest Summer Concert Series will start on June 28th. Free concerts will take place on the lawn outside the Walled Garden. This is the 38th year for this popular concert series presented on Saturday evenings at 7:30 PM in the summer. More information here.