Paine to Pain is Back- Registration Open 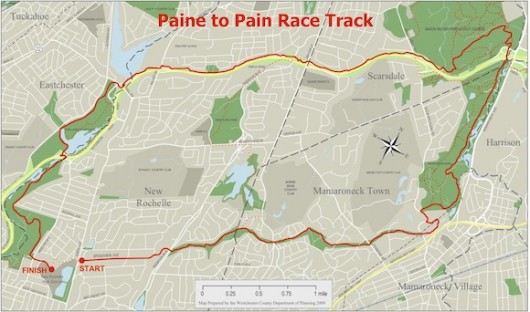 NEW ROCHELLE– The Paine to Pain Trail Half Marathon is returning for its 5th consecutive year on October 14th, to be run on the Colonial Greenway. Registration is now open. The Greenway, dedicated in 2008, is a massive figure-8 with over 20 miles of trails, incorporating many Westchester communities that nestle Long Island Sound.

Hosted by the local Sound Shore Runners and Multisport Club, the 13.1-mile race starts at the Thomas Paine Cottage in New Rochelle, off North Avenue with a gunshot from a colonial musket (what else?)

The course proceeds up the Leatherstocking Trail past Larchmont into Mamaroneck, runs through Saxon Woods, and returns down the Hutchinson River Trail through Scarsdale and Eastchester before finishing on the New Rochelle High School track. The finish line is across the street from the start. Approximately 12 of the 13.1 miles are on dirt paths and in the woodlands.

The race has received exceptional feedback from runners over the past four years as it has rapidly grown into one of the premier trail races in the northeast. Started in 2008 with just 50 runners, the race hosted 192 in 2009, 304 in 2010 and 485 last year.  The race now sends runners off in waves, using electronic timing, to avoid bottlenecks on the trail during the event.

Reviews from last year’s race can be seen online here:

The event is a fundraiser to help improve the trail system.

Race information, registration and a course map is available at the Paine to Pain website.