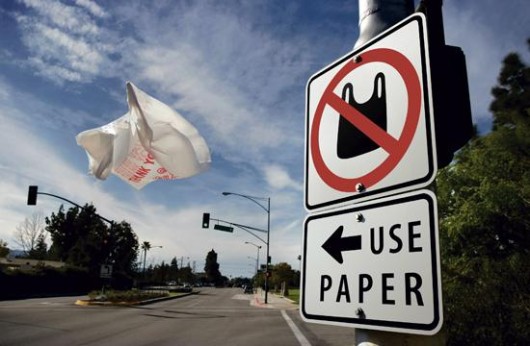 Larchmont–Now that Larchmont and Mamaroneck Villages, and Rye before them, have passed laws to ban plastic shopping bags, we received a note from a Washington PR firm that represents Hilex Poly – an American manufacturer and recycler of plastic bags.

“Although lawmakers have good intentions,” writes Briana Washington of Edelman Public Relations, “legislation that limits plastic bag usage is misguided and has been proven ineffective at reducing the litter that does exist, as in the case of San Francisco’s plastic bag ban.

Plastic bags make up less than 0.5 percent of the U.S. municipal solid waste stream, according to the EPA. When such legislation is implemented, consumers are often forced to rely on less environmentally friendly options, such as reusable bags which are not recyclable, or paper bags which require more energy to manufacture.

You might find the content on BagtheBan.com insightful has it hosts facts about the negative consequence to plastic bag bans and taxes.”

Refuse to pay it. If I run into a store without my own bag I buy less and shove my purchase in my pocket book. I am so very tired of Connecticut taxes. The only thing that keeps me here are my kids and grandchildren.

Saw a woman walking down Mamaroneck Avenue yesterday with her Chinese food and her whole order dropped out of the bottom of the bag onto the sidewalk.

I think we should look into alternatives that address the real issue, which is resources. The problem with plastic is that it is made from petroleum a known non-renewable resource. And of course paper bags are made from cutting down of trees. It has been such a long standing debate..paper or plastic? that consumers believe these are their only option. This is no longer the case. Technological advances have given us the ability to create compostable bags that are made from corn, potato, sugar, or soy starches. These are highly renewable and biodegradable without chemical additives. Furthermore by using compostable material a second or third life is ingrained in the bag as it can be used to separate the compostable portion of our household waste from landfill. Winning! Oh compostable bags look and feel like plastic, handles and all..they just happen to be non-toxic. And if your asking what happens to the compostable bags when they’re done…They become compost..think of it as super dirt..farmers,growers,planters, and parks of America you’re welcome. Any questions?

I find the plastic bag ban ridiculous as most emotionally driven initiatives are. Has anyone seen the elderly at CVS on Mam’k Ave trying to carry a full paper bag with no handles while they manuever their cane? Poor things! Most people reuse plastic bags over and over, not paper. What happens when it’s raining to paper bags? Why not just keep the option of paper or plastic and still encourage reusable bags? Allow people to make their own decisions.