Open Mike: The War on Fall 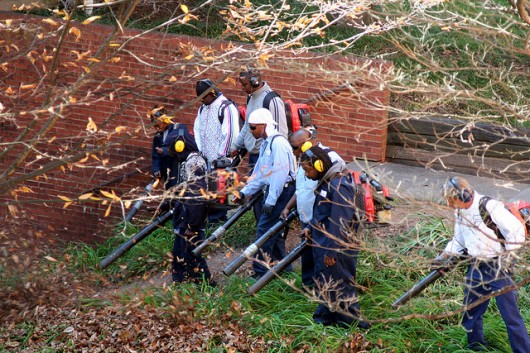 MAMARONECK–There’s a war going on in my neighborhood.

It’s a war that I know will continue despite my best efforts. You may very well be aware of it in your own part of town.  No, it’s not the war on terror or poverty or the ridiculous war on drugs.  This war gets far less attention even though it physically effects me, and I’ll assume, countless others every week.

I live on a very attractive, tree lined block in Mamaroneck just a minutes walk to the harbor.  My street has very little traffic because it’s a one way that serves the four apartment buildings that line it.  I’ve always felt that it’s a special part of the village.  But don’t let it fool you…because at about 7:59am the war begins…again.  It’s the war…on fall. It is by far the most violent of the many battles fought against the seasons in my neck of the woods.

This morning I counted no fewer than 6 troops simultaneously scouring the battleground.  Sometimes there are two companies serving two different buildings at the same time. The place is swarmed. They leap out of their tank like vehicle armed with high revving blowers mounted to their backs and begin the assault from all directions while the guy who appears to be the leader of the unit pushes around a prehistoric blower on wheels that sounds not unlike a small airplane beginning its ascent.  The air is suddenly filled with the fumes of 2 stroke motors as he barks out orders that are miraculously found audible by the others concerning the mornings approach towards getting the leaves corralled onto tarps that are dragged around by the remaining foot soldiers. The whole event really does resemble a cattle drive…just louder.  The leaf doesn’t stand a chance.

Sometimes it’s easy to forget what season it is on my street.  With the strange, unseasonable weather we now experience and the invention of the leaf blower it’s anyone’s guess. In the days of the rake you tidied up according to how much vanity or energy you had and left the rest to decompose and perhaps fertilize your lawn for next year. Those days are over. If there’s a leaf to be found these modern day cowboys will find it.  They get under bushes and trees, cars and gutters.  They crawl under decks and around porches.  I’ve seen a single leaf chased by one of these guys across a parking lot.  Why does everybody seem to hate leaf so much? When they’re actually on the trees people are known to travel hundreds of miles and spend plenty of money to gawk and ooh and aah at them. They’re certainly glorified in Halloween and Thanksgiving related advertising.  You even see cute construction paper and crayon versions taped to the windows of elementary schools in tribute, but try to find a pile in my neighborhood to jump into. If I do find a pile it’s usually taking up a very valuable, legal street parking space waiting for the town to come pick it up…which is a whole other topic.

As a kid I never realized how beautiful and peaceful the simple sound of someone raking leaves is.   It’s nostalgic at this point.

This fall, in the unlikely event that I happen to come across someone actually in their yard using a bamboo rake I’m going to stop, compliment him or her….and listen.

I awake today to the sounds of spring in beautiful Larchmont: A few birds chirping :), happy kids marching in clusters down the sidewalks on the way to school :), the first of the season’s leaf blowers :(. Feelings I felt about the above in the following order: 1. Birds – happy and bright; 2. Kids – satisfied and content; 3. Leafblowers – I gotta get out of here!! No peace left to be found in the burbs in the 2 most wonderful seasons, spring and fall.

It is our birthright to enjoy all four seasons in their full glory and without the constant drone of leafblowers out the window. Seems local municipalities don’t understand that. Time to look for a new way of life. City? Rural? Both would certainly be quieter than the typical day here with several hours of blowers blasting around us from all sides. I’m thinking of a nice cozy tree-lined street in Brooklyn or a highrise in Manhattan not too far from a leafy park. Or maybe even a little seaside cottage in Maine. Time for a change. Bye bye, burbs. I’m out. The leaf blowers got the best of me.