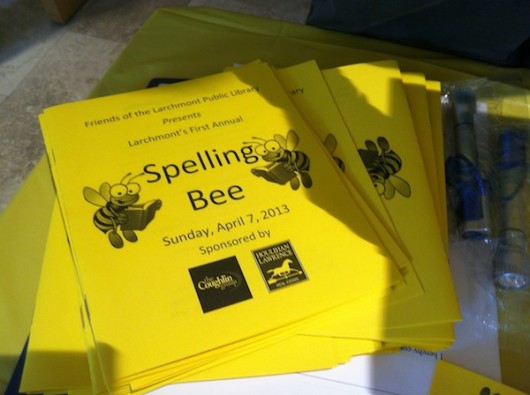 Larchmont–Our team of three, Loop-Bee-Loop (a spelling “bee” theme was requested in team names) waited in the audience of a couple of hundred people at Larchmont Temple Sunday, silently spelling the words the first teams up on stage were commanded to spell. Gazebo. Entrepreneur. Collaborate. At first, no one seemed to lose. And there were to be twenty teams to go.

The Friends of the Larchmont Library‘s first annual Spelling Bee was underway. At first, the microphones sputtered. The room got hot. The words, apparently, too easy. The afternoon did not look promising. 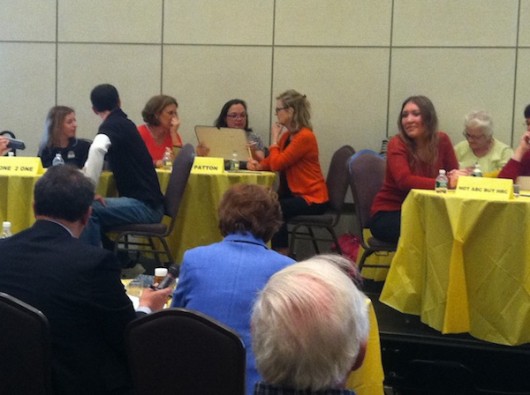 This first half of the Bee brought 4 teams each, or “swarms,” to the stage–five swarms in all–who were to write their word on a board and hold them up.  Each team introduced itself. Sean Fitzpatrick of One2One Bodyscapes said of his team, “We know about exercise, nutrition and wellness. We don’t know a thing about spelling.”  They lost quickly.

There were teams from The Larchmont Hysterical Society, a group of former Princeton roommates, the Larchmont Summit, the School Bored (which included Murray First Grade teacher Betsy Nolan)  and others, all nailing words left and right. 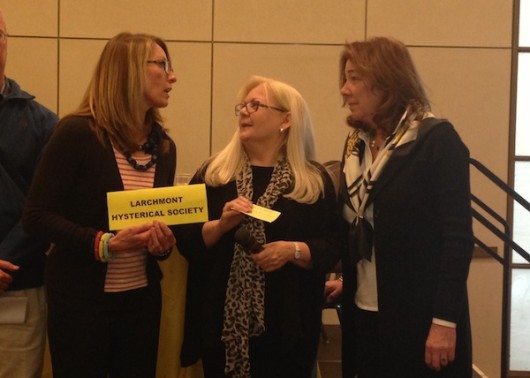 The Trustees of the Larchmont Library lost fast (Pam Dubitsky, you may want to spend more time in the stacks.)

We were in Swarm Five, the last to take the stage. The judges before us: Mamaroneck Town Supervisor Nancy Seligson, New York State Sen. George Latimer and Larchmont Mayor Anne McAndrews.

We sat on stage with teams from SotheBEES Realty, three students at Mamaroneck High School, and a team from Bee a Friend of the Family. I am not sure how we managed to beat them. When I remember the winning word, I’ll put it here, if I can still spell it. 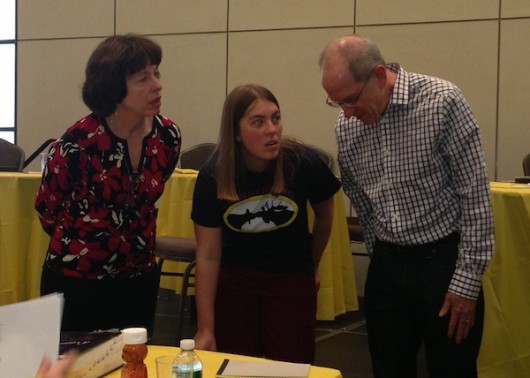 The final round comprised those seven winning teams in a sudden death match, contestants lined up in front of the audience like a firing squad.

Master of Ceremonies Michael Zuckert read our word. It sounded like “voovouzeela.” It means a South African plastic horn. We had 30 seconds. The gong sounded. Everyone looked at me. I handed the mike to Tracy.

Our next word sounded like “ambucheer.” French origin. A mouthpiece for a woodwind instrument. We knew ‘bouche’ was mouth in French. E-M-B-O-U-C-H-I-E-R, I said.

It was D Tours turn. Sounded like “hayory.” A Japanese garment. H-A-O-R-I. The winner! 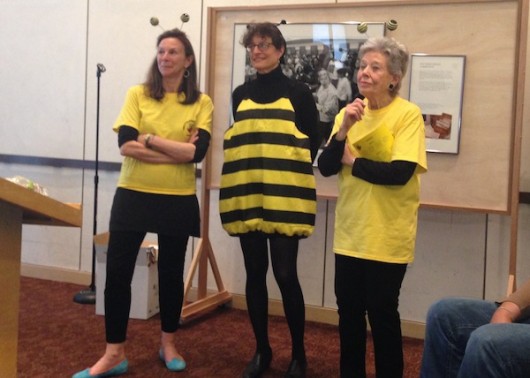 Congratulations to everyone. We all went home with a honey bear from sponsor Trader Joe’s and D Tours received a $100 gift certificate from Anderson’s Books.

Winning word: Haori (look it up!).

Thank you for correcting it and congratulations on making it all the way to the end.