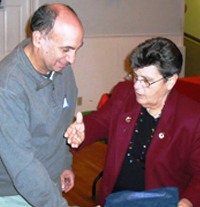 held a Holiday Dinner on Thursday, December 17 at the American Legion Hall at Flint Park in Larchmont. More than sixty plus were in attendance to honor Augie Aloia with The Charles J. Gronberg Award. Gronberg, for whom the award is named, was the founding father of The Old Timers’ Association of Mamaroneck-Larchmont fifty years ago. This prestigious award is given annually to a member of the community for outstanding service within the two municipalities.
Mr. Aloia is a lifelong resident of Mamaroneck and attended the Rye Neck schools. He played baseball at Harbor Island with his schoolmates in his youth and was an active sportsman throughout his life. An avid baseball fan,  Augie can recite the name of every man who has played for the Yankees, when he played, and how much money he made.
Augie served in the Army in the early 1940s in Europe and was in the invasion of Italy. He married Marion Paonessa in 1949 and they have three children and five grandchildren.
Mr. Aloia worked for Barnhart’s in Port Chester and later for the Village of Mamaroneck, from which he recently retired.

A Peace Pole was installed at Daniel Warren Elementary School on Friday December 18, along with  an original origami-inspired Peace Sculpture in the new Children’s Garden.  The Peace Pole is made of cedar wood and inscribed in nine languages with the words, "May Peace Prevail on Earth."  Peace Poles originated in Japan in 1955 and are now located on every continent, iand at such extraordinary places as the Pyramids of Giza and the magnetic North Pole in Canada.

The Peace Sculpture was designed and crafted by well-known artist Joe Lividini, a master iron worker and artist whose other works can be seen at Lincoln Center, Fordham University and the Citicorp Building.  The sculpture of an origami peace crane is mounted on an 8 feet tall pedestal and crafted of stainless steel. 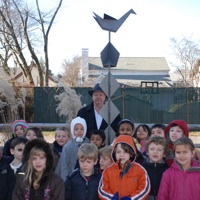