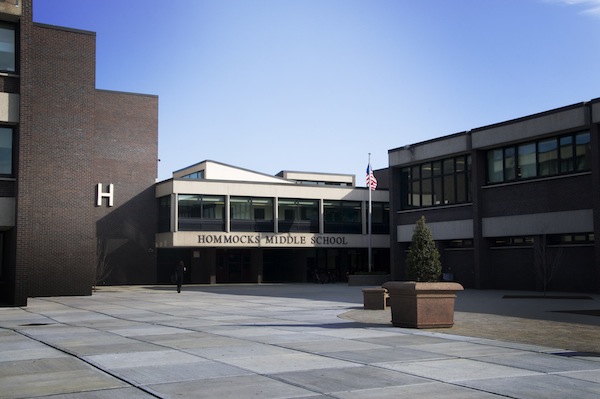 Please note: Snapchat image in question, as reported and posted by Fios1 News, below.

Two more Robo Calls and texts were sent out Monday morning about a new threat at Hommocks Middle School.

At 7:58 am: “Late last night, the Village of Mamaroneck police informed us that a former middle school student living in New York City posted an alarming photo on Snapchat making a general threat. Local police contacted NYPD and are continuing to investigate. As a precautionary measure, for the safety of our students and staff, there will be a police presence at Hommocks middle school today. We will provide information as it becomes available.”

This, of course, follows a reported threat at the school on Friday and a second unconfirmed incident earlier in the week.

Details about the type of threat, the snapchat post, the age of the individual, or the reason for the police presence were not made available. This image of the snapshot threat was obtained by Fios1 News 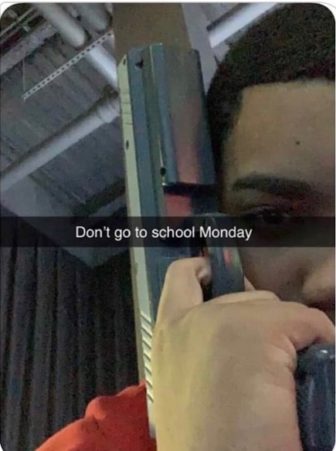 Calls to Debbie Manetta, the public information officer who sends out the robo calls and texts from the School District offices at Mamaroneck High School, the NYPD and Village Police were not returned as of press time Monday.

Members of the community have expressed frustration with the lack of more information.

One parent writes in a note to the School District, “The community is awash in rumors and gossip in regards to the series of events which occurred this past week. I believe we can, as a community, come together and rise up in support of the District and administration, if only we knew what we were dealing with. ”

Comments on theLoop and social media reflect a wide spectrum of reaction, from outrage to silence to accusations of “rumor mongering”

An administrator of Facebook page “Love Larchmont” texted, “been requested not to post anything on the Hommocks incident.” 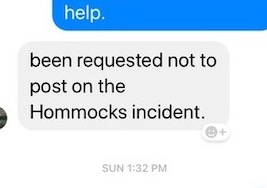 There have been various threats against students at Hommocks Middle School in the last few years: 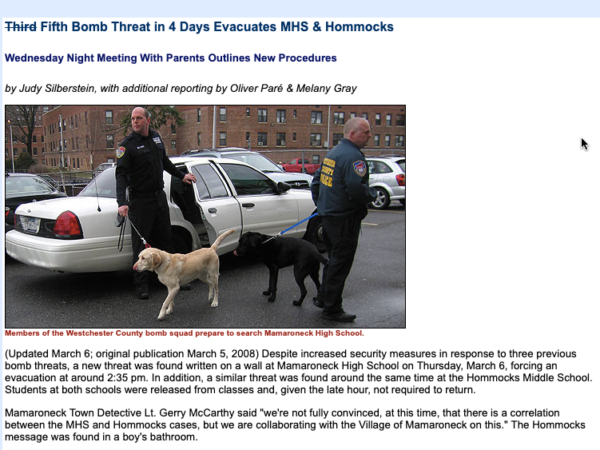 The School District has come under fire for tight restrictions on public information for these incidents and others, most notably last year during a chaotic emergency dismissal at Mamaroneck High School.

The media in general and theLoop in particular have been criticized by the School District for efforts to report lapses in public information.

Threats of a school shooting and bombing aren’t “drama,” JC, they’re real and present dangers faced by the families of Larchmont and Mamaroneck. Been following the news lately? Children’s bodies on the floor, dozens of deaths? What about the daily non-mass school shootings occurring across the country by urban youth, that don’t even get reported because they are too many and too often?

Just because no one was hurt this time doesn’t mean there wasn’t a real threat. You’re also downplaying both the emotional and financial damage done to the town and its residents.

I appreciate your relentless investigation into this. Community members deserve to know what’s going on, as it’s known, and not when a board meets to decide what should and shouldn’t be known by how, and what information is “digestible” by the public. Perhaps students/parents know something about the perpetrator?

They’re likely withholding to protect the town from bad press, among other PC reasons.

Who asked Love Larchmont not to post about the incident ? Was it the police ? Is someone trying to censor/suppress information ?

I believe it was just an internal decision by their group. We sent a link to our article to the Love Larchmont FB page, as we often do with our news, but an administrator wrote back, “been requested not to post on the Hommocks incident.”

That must be so anxiety provoking for parents – the lack of communication. I just thanked the equivalent group in Mamaroneck for allowing open communications.

No one asked Love Larchmont to not post. We ( Amy Sullivan and Tiffany Smith the Founders) decided to not post because of a lack of information. No one from the district or police asked us not to post. theLoop got a reply from a moderator. We asked our moderator to not post anything that came through regarding Hommocks. theLoop has taken our words and has twisted them completely making us look like we were hiding something which is NOT the case.

You write, ‘We asked our moderator to not post anything that came through regarding Hommocks.’

We posted, ‘An administrator of Facebook page “Love Larchmont” texted, “been requested not to post anything on the Hommocks incident.”’ We included a screen grab.

How do these statements differ?

0
Reply
Previous articleFrom the Editor: Call for Transparency for Mamaroneck Parents, Students
Next articleMamaroneck School Board to Address “Incidents and Protocols” Tuesday Night