The 2011 NY Knights finished pool play as the top seed out of 16 tough teams from NY (Staten Island, Brooklyn, etc), as well as teams from top Baseball Academies in NJ & in Pennsylvania allowing just 2 runs in 3 pool games, while scoring 15 runs. 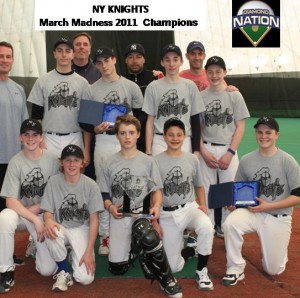 They went on to bring home the Tournament Trophy with victories in the semi-finals & championship game landing a decisive 13-2 victory.

This was the 1st outing together for this group of players from Mamaroneck, Ardsley, Yorktown, Rye, New Windsor, Montgomery, Scarsdale, & Blauvelt, NY, as well as Greenwich, CT.

This was a true Team victory with strong & timely hitting (2-out, 2-strike hits, etc), heady base-running (scoring from 2nd on flare singles, etc), slick fielding, effective pitching and much camaraderie among players who normally don’t play together given the various school & club teams they play for respectively.

The umpires called them the best catchers in the tournament with clutch plays at the plate and numerous runners thrown out by Andy Karlan & Gio Marrero.

Everyone contributed on the bases and at-bat led by Dylan Resk (MVP), Alex Volpi & Andy Karlan.

Near-errorless fielding included double-plays, many pickoffs, & leaping catches by Jakob Harman at 2nd base, among others.

The NY Knights were coached by Jefferson Infante.