NY Fracking Update: Where Does the Wastewater Go? 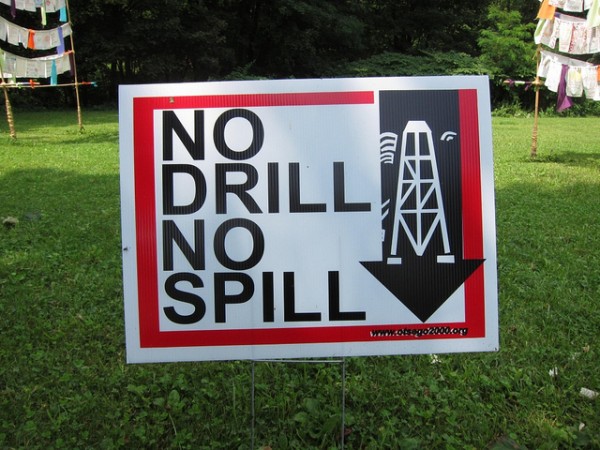 A group known as Environmental Advocates of New York has released a report that claims New York’s Department of Environmental Conservation (DEC)  fails to track the  waste water from about 6,800 existing low-volume hydraulic fracturing, or  “fracking” wells currently operating and doesn’t know where the drilling waste is going.

The report, Out of Sight, Out of Mind, says only the gas companies know how wastes from their existing gas drilling operations are actually disposed of, and they’re not talking.

The issue of safe waste water disposal was noted as a key challenge facing regulators, the gas industry, and environmental groups in a New York Times article and in a story by the Associated Press. (See our previous coverage.)

Larchmont-based real estate attorney  Elizabeth Radow, who is head of the local chapter of the League of Women Voters, testified at a  hydrofracking forum that she has received calls from New York property owners who have had problems with  contamination from existing vertical wells. She noted that the environmental, financial, and health risks from drilling are often born by the individual property owners, not the gas companies who lease surface lands for drilling.

Based on a review of about 100 state drilling permits, the report found that New York regulators request minimal information on waste disposal. Companies used vague terms, like “hauled to an approved disposal facility,” when asked about disposal plans.

“Following the fracking waste stream from a gas well to ultimate disposal is nearly impossible,” according to Katherine Nadeau, program director at Environmental Advocates.

“Yet this waste water contains toxic chemicals, such as heavy metals and radioactive particles that require strong safety regulations.”

She says that the vertical low-volume fracking for most wells in the state, uses much less water than the high-volume fracking being contemplated by Governor Cuomo and other state leaders. So the weak record for DEC on wastewater tracking does not inspire confidence and maintaining adequate safety regulations would become even more urgent with high-volume horizontal wells.

Proposed legislation currently in the state Senate and Assembly would make waste from all the wells subject to “cradle-to-grave” tracking, handling and disposal measures required for other hazardous wastes. But the legislation is opposed by the Independent Oil & Gas Association of New York.