New York ranks among the lowest in the 50 States with women in political office. Women are still largely absent from corporate boards. Women still make 78 cents on the dollar compared to men. We know this, we’ve heard this over and over. How will this change?

New York Democratic Senator Kirstin Gillibrand has begun a call to action to American women, much like Rosie the Riveter a generation ago, to empower women to get off the sidelines and make the important political, economic and social decisions about issues that they care about, and that effect them: Off the Sidelines.

I was privileged to be at a meeting with her and a small group of  philanthropists, educators, non-profits, entrepreneurs, journalists and more to hear about the beginning of a year-long effort to raise the profile of this organization and, hopefully, change the world.

I encourage all women and the men that care about them to learn more about this effort. 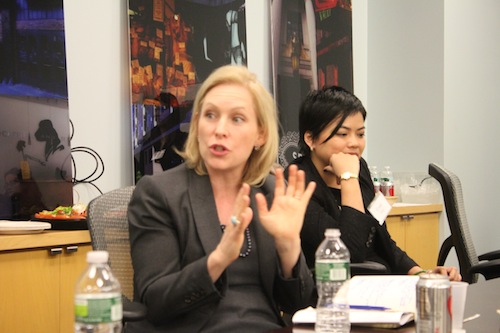