New Rochelle’s Public Works Department has begun the fight against unsightly summer algae on Beechmont and Glenwood Lakes by using the herbicide Reward (active ingredient: Diquat Dibromide), which they hope will “combat the overgrowth of water vegetation,” otherwise known as the green slime. (See our previous coverage.)

Caution signs– a state requirement– are posted at both Lake locations.

According to the Commissioner of Public Works  Alex Tergis, the herbicide will be “absorbed by plants in minutes, providing broad-spectrum control of floating, submersed, and marginal weeds.” 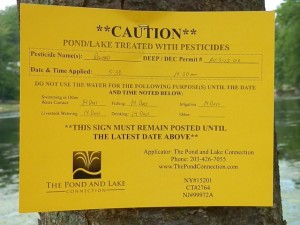 Both the product and the company that applied it ( Pond and Lake Connection) are licensed and registered by the Environmental Protection Agency and New York State.

There are two basic types of herbicides– contact and systemic– say experts at the North American Lake Management Society, a nonprofit scientific and educational group that has studied the pros and cons of herbicide use in lakes. Reward is a contact type of herbicide, meaning it kills portions of the plants it comes in contact with pretty fast.

The downside: As the water vegetation dies back, the lake water may turn brown or whitish. Also, the product label on Reward warns that it can be “toxic to aquatic invertebrates,” including certain fish and wildlife, such as insects that begin their life cycle in the water, crustaceans, mollusks, and worms that live in water.

The caution sign by each lake notes that fishing is prohibited and visitors to the lakes should avoid contact with the water through June 13.

But will the slime really go away?  “The treatments will be repeated,” says Commissioner Tergis, “but to a lesser degree, based on grow back as we work on long-term improvements of our lakes’ water qualities and the aquatic life they sustain.”