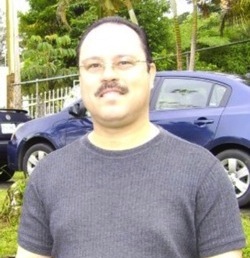 New Rochelle Police Responded Sunday to a report of an emotionally disturbed man at 18 Hickory Street Apt 3H, named Samuel Cruz, said to be an artist.

According to a City spokeswomen,  “A relative reported that the subject, Samuel Cruz, was off his medication, acting irrationally, and refusing to answer the door to the relative, who had come to check on his welfare. Responding officers were able to establish oral communication with Mr. Cruz through his locked apartment door, but were unable to get him to open the door. After a lengthy dialogue with Mr. Cruz and repeated attempts to get him to open the door, officers ultimately concluded that Mr. Cruz was behaving irrationally, in distress, and a potential danger to himself and others in the building.”

Officers then forced open the door and found Cruz holding a hooked bladed knife. Because he was threatening them with the knife, police reportedly tasered him twice, without effect. One officer shot Cruz, killing him.

The case is under investigation and the officer who shot the man has been placed on modified duty.