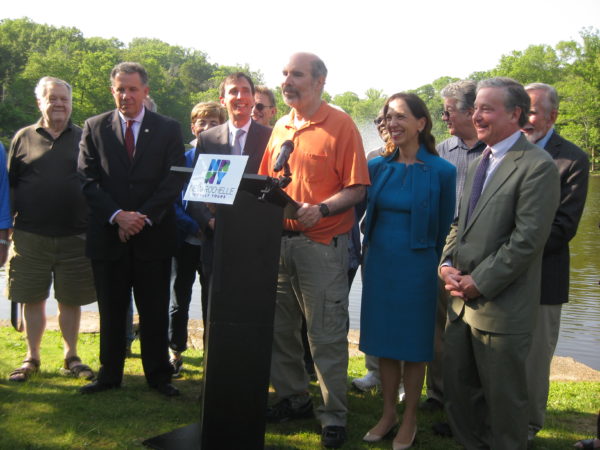 Standing in front of Beechmont Lake, New York State Assembly Members Amy Paulin and Steve Otis, announced Wednesday that the City of New Rochelle, through their efforts, has obtained a $250,000 New York State grant for the remediation and dredging of Beechmont Lake. The funds will be used to  restore the lake’s ecological health, beauty, and water retention capacity. This work will also help mitigate flooding. 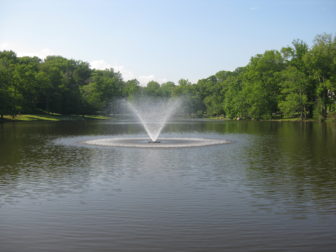 For the past 37 years, Beechmont residents and The Beechmont Association have advocated for cleaning up the lake. In the last few years, water fountains have helped minimize algae blooms, but underlying problems remained.

I believe that there is a dam at the lower end of the lake designed to permit the water level in the lake to be lowered before a storm, so that the lake will be refilled by the storm (from the rain and the Pinebrook) and will act as a water retention basin, alleviating, to some extent, flooding along the Pinebrook (called the Pine Brook in the Town of Mamaroneck and Village of Larchmont) between Beechmont Lake and the Premium River/Long Island Sound. All of this was constructed by the Pine Brook Drainage Commission, which included New Rochelle, Mamaroneck Town and Larchmont Village, about 90 years ago. That dam has not worked, and has not been made to work, for decades. Hopefully the grant will include fixing the dam, and, equally hopefully, New Rochelle will then operate it as it was supposed to have been operated.