A New Rochelle father has been charged with the death of his 2-year-old son early Sunday morning, police said. 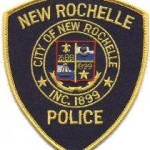 Richard Leak, 30, is being held in Westchester County Jail following his arrest Wednesday for the murder of his child, Khalil Leak, who already had spent 15 months in foster care after being injured as an infant.

Emergency responders took Khalil to the hospital following a call from a neighbor who found the boy unresponsive in his father’s apartment, according to a spokesman for the Westchester County District Attorney.

Leak’s next court appearance is scheduled for Jan. 20.  He faces 25 years to life in state prison.