New Report: What’s in our Air?

Spring is definitely in the air, but what else?

A new report just out from the American Lung Association says that the air in Westchester contains a lot of undesirable things as well. 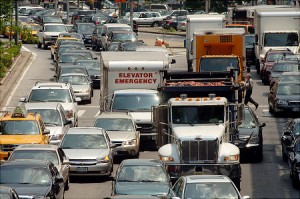 The 12th annual report, State of the Air 2011, notes that air quality in the state overall is somewhat better than in previous years. But the study also finds that Westchester County was the dirtiest county in the Hudson Valley and scored an “F”  for ozone (smog) pollution.

When inhaled, ozone irritates the lungs, resulting in something like a bad sunburn within the lungs. Over time the health effects can be deadly.

“Ground level ozone is a real challenge for Westchester,” said Dan Hendrick, spokesperson for the New York League of Conservation Voters, “largely because of the county’s lack of mass transportation options.”   With most people driving, he said that we certainly need to think about using more energy- efficient cars that pollute less.

Nationwide, all metro areas in the 25 cities most-polluted by ozone showed improvement over last year’s report. Still the report notes that Westchester is not alone. Nearly half the people in the U.S. (48.2%) live in areas with unhealthful levels of ozone pollution.

Citing overall trends, Sandra Kessler, interim president and CEO, American Lung Association in New York, claims, “These results show that the Clean Air Act and other clean air laws are working. To ensure all New Yorkers breathe healthy air, it is our job to make sure that Congress doesn’t weaken the Clean Air Act and that state government doesn’t roll back important clean air regulations.”

The full report is available at: www.stateoftheair.org/