Two new aerating fountains are now operating in New Rochelle’s Beechmont Lake located at Beechmont Drive and Pinebrook Avenue. The fountains are designed to help eliminate the algae blooms, otherwise known as green slime, that have plagued the lake –and many other lakes in Westchester– in past summers. (See our previous coverage.)

Besides improving the lake’s oxygen levels, the fountains will add to the enjoyment of the lake at night with special lighting.

After a lengthy negotiation with the City of New Rochelle, The Beechmont Association, a neighborhood citizen group, raised the necessary funds and initiated the lake’s restoration and installation of the fountains, requiring a power supply and the lighting. 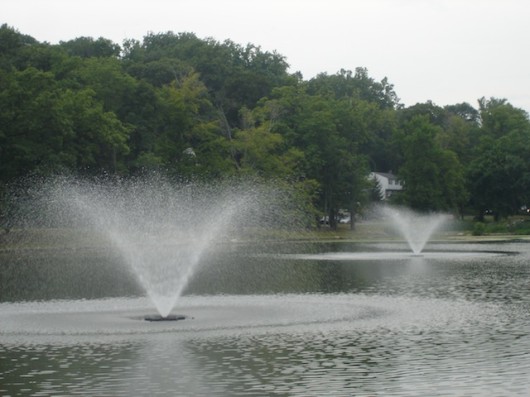 Forty-one residents of the Beechmont community donated a total of $10,000 for the fountains/aerators  with the largest donation of $5,000 made on behalf of Iona College by its President, Dr. Joseph Nyre. The City of New Rochelle paid for some of the costs with a local match–$8,500– for purchasing , installation, and upkeep of the fountains.

Dr. Joseph Stabile of Iona College’s Biology Department advised the project team, led by Victor Stanionis and the Beechmont Lake Committee. Dr. Stabile identified the number of fountain/aerators and the type that would be best for Beechmont Lake.

Dr. Stabile and his students also measured the depth of the lake at various points finding the most suitable places for the fountains.

Going forward, he and his students will monitor the oxygen levels in the lake to determine how long the fountains should run each day.

The project was guided over a three-year period by a team of residents including Fred Wiener, who chaired the Beechmont Lake Committee. New Rochelle Mayor Noam Bramson and Councilman Barry Fertel helped shepherd the project through city agencies.

The next phase of the project will begin soon, requiring more funds and ongoing work on the remaining algae.  A formal dedication of the fountains is to be scheduled.

Mr. Jones has it right! Controlling run off of lawn chemicals is also essential to protect the Sound.

The issue isn’t just a matter of aerating the Lake with fountains, its about targeting the cause of this algae (brought on by excess phosphorous/nitrogen getting into the water). The surrounding homes are applying chemical fertilizers, pesticides and “weed” killers to their lawns, gardens etc. all which contain excessive concentrations of phosphorous and nitrogen. When heavy rains come, those fertilizers run off into storm water drains which drain directly into the Lake. These chemical compounds encourage the growth of these algal mats on the water’s surface and when the algae dies off, it takes up oxygen in decomposition, decreasing the levels of dissolved oxygen within the Lake itself. This results in fish kills and poor water quality. So fountains are cute, a very nice gesture, but lets tackle the REAL issue.