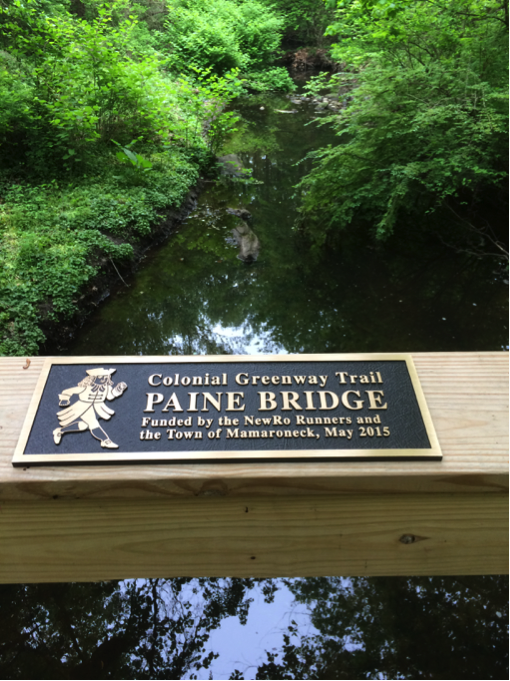 If Thomas Paine could see this now.

There’s a new bridge with his name nestled in the Colonial Greenway (the 15.1 mile running/walking/biking/loop connecting several Towns and Villages), on the Leatherstocking Trail. It is  in the Sheldrake River Trails section and provides a crossing on the Sheldrake River.

The Town of Mamaroneck, the Colonial Greenway partners and the NewRo Runners Club have dedicated the “Paine Bridge.” Our guess is that it’s near the “A” on this map.

Eric Turkewitz, of NewRo Runners Club, said “The effort to create the Colonial Greenway began in 2001 when I realized we could have a first-class running trail system if we connected the five separate trails systems in the area”.

He brought the idea to New Rochelle Mayor Noam Bramson who reached out to Mamaroneck Town Supervisor Nancy Seligson. Bramson and Seligson created a collaborative effort with representatives from the City of New Rochelle, Village of Mamaroneck, Village of Larchmont, Scarsdale, Eastchester, Westchester County, Town of Mamaroneck and the predecessor club to New Ro Runners.

The group received a grant from the New York State Greenway Association for signage and blazes.

The Paine to Pain Trail Half Marathon is now in its 8th year and was started by Eric Turkowitz in 2008. It has grown in popularity since it began and is now considered one of the country’s top trail races. NewRo Runners CEO Steven Stein was also present and helped dedicate the bridge — not by cutting a ribbon, but by pouring water over the new plaque from a Paine to Pain water bottle.