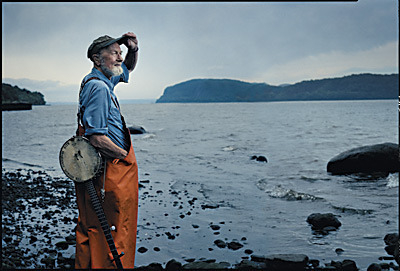 There is a movement to name the new Tappan Zee Bridge after Pete Seeger. If youre interested, go to change.org’s petition.

“Singer/Songwriter/Activist Pete Seeger, who died January 27, 2014 at the age of 94, was a champion of justice, civil rights and the environment.

Naming the new Tappan Zee bridge across the Hudson River for this lifelong resident of New York State would be a fitting tribute to a man who did so much to help improve the mighty Hudson and the towns along its banks.

Seeger pushed for a cleaner river in the 1960s — long before others took on the cause — and used music to push for an environment friendly river. He was the founder of the Hudson River sloop Clearwater which to this day sails up and down the river helping to encourage environmental activism and the waterway’s rebirth. Over the years, Seeger’s efforts have lead to a significantly cleaner river; today swimming is possible in many formerly polluted areas.

The idea of naming the new bridge, which is expected to open in 2018, has been put forth by Greenburgh town supervisor Paul Feiner who hopes naming the bridge after Seeger will inspire travelers to keep the river clean. Feiner has promised to bring this proposal to NY Gov. Andrew Cuomo and members of the NY State legislature.”