Less than One Third of Larchmont’s Cambium Condo Sold 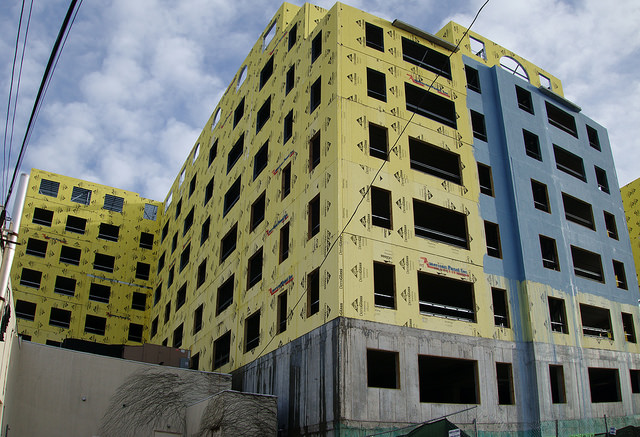 Larchmont’s Cambium Condominium building, which has stopped and re-started construction since 2013 is less than 1/3 under contract, theLoop has learned.

At an Open House over the weekend, a reporter viewed the model apartment.  It faces the rear courtyard, away from I-95.

The multi-colored building insulation is being removed, he was told, because it was found to be defective, and has to be replaced.

He was told that the first phase of the building, about 95 units, the units closest to I-95, is about 44% in contract.

The second phase, the part further from I-95, is not officially on the market,  but two apartments in that phase on the top floor, facing the Maxwell Ave. Transfer Station, which the buyer is combining into one, large apartment, is already under contract.

A former worker on the Cambium site tells theLoop he believes delays at the site have been caused by construction quality issues.

“They can’t start interior work such as electricity or drywall because the building is not watertight,” says the New Rochelle resident who asked that his name not be used. “I suspect that money is an issue.”

But a Town of Mamaroneck official rejects that allegation.

Administrator Steve Altieri responded, “Of course it is not watertight: not all the exterior sheet rock is installed nor are the windows….Generally you close up the building to make it watertight by installing the sheetrock and windows.”

The Town of Mamaroneck Building Inspector did not return an email or call; neither did representatives for the project at Douglas Elliman Real Estate.

We have been trying for several weeks to get information from Douglas Elliman Real Estate about the Cambium at 10 Byron Place, the condo development in Larchmont over near the Maxwell Avenue Sanitation Facility and the I-95 on-ramp.

Houlihan-Lawrence Project Marketing no longer manages sales on the property; that has been taken over by Douglas Elliman.

Several inquiries from theLoop to Elliman about reported delays and other matters went unanswered. Finally, in response to an email,we were told by spokesperson Samantha Feld,

“At this time, we don’t have the answers to your questions because it’s a bit premature, but we would love to invite you to the relaunch in the coming weeks. We will be having a viewing of our model apartment at this time as well. ”

If you look at the Cambium website, you will find only “404 (Page Not Found) Errors.”

Since last year, readers have reported the condo was in financial trouble, that the original contractor left, that work had stopped and re-started, but Elliman would not confirm or deny any of these statements.

Earlier this month another reader pointed out the 7 story building’s surface material was being removed.

Anyone out there know?  Please leave a comment below. 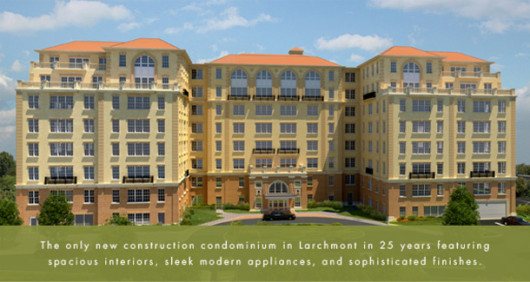 Remember the 51-unit luxury apartment building (5 of the 51 were to be workforce housing) now being built off Palmer Avenue near Pine Brook Drive, behind Jack’s service station, across I-95 from The Cambium, and misnamed “Pinebrook” Condominiums? Remember that it was to be luxury housing, despite being right next to I-95, as The Cambium is? Remember what it is now–still 5 units of workforce housing, but 0 units of luxury housing and 46 of affordable housing–apparently because the builder ran out of money, and sold the property to a developer of affordable housing? Are we about to see a repetition of that?

You got it right Ralph, its time to sell and get out of Dodge (Larchmont). Between the social engineering imposed by Democrat appointed Federal Judges, Governor Cuomo and his corrupt clownmates in the Albany legislature, and the sycophants inhabiting our local town halls we ARE DOOMED. The next step will be the conversion of the long vacant Larchmont Store into a Medicaid mill and the Food Horizon to a food bank.

This is the first step in a plot directed by the Democrats in the Comintern to bring Section 8 housing to Larchmont.

What could possibly go wrong when you build on top of the highway, railroad and town dump. Sounds heavenly…

No answers but it certainly looks like an eyesore.

The Town Administrator did not refute the fact that no interior work could commence until the buidling is water tight and has not.. He is not too bright.

The Town Administrator is very bright, so that I do not know to whom the comment refers.

By that I meant that he did not respond to the actual comment concerning the the interior work which cannot be started unitl the building is water tight; instead he said the builiding is not water tight which is obvious.
On a different matter whid would want to live in the first phase while the project is still a construction site with the completion of the remaing 80 or 90 units ongoing?