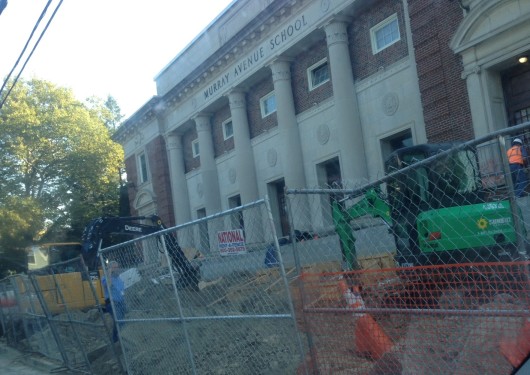 update:– The District has announced it will suspend construction and road closures in the area during the first week of school.

Larchmont–Mamaroneck Schools Superintendent Dr. Robert I. Shaps has sent a letter District-wide telling many parents what they could already surmise– the Murray Avenue stairs project will not be ready for the start of school Sept. 3, and will continue into Fall.

Among the temporary changes will be traffic re-routing, a temporary entrance and relocation of two small group instructional spaces.

Areas of the steps have been cordoned off to foot traffic for several years due to structural damage.

“We recognize the inconvenience this project delay will cause, Shaps says. “Unfortunately, as you may be aware, the challenges of public work projects such as this abound; similarly to municipal work, school districts as public institutions must abide by the rules and regulations dictated by NY State law.  When a change in contractor is made, as has been done in this case, the District must follow a stringent legal process.  At the same time, we are cognizant of our fiduciary responsibility and are committed to doing all we can to complete this project within planned costs.”

An earlier project replacing an historic stone wall at Murray was met with mixed reviews. 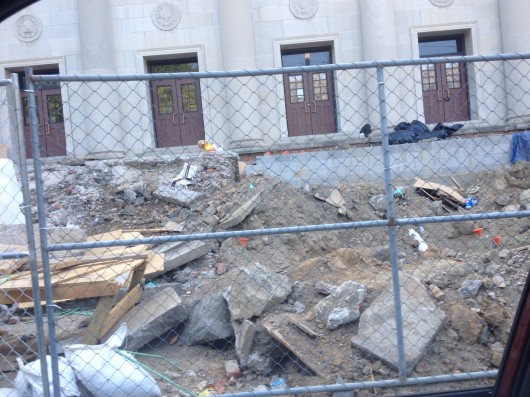 I live by Murray Avenue School, and it has seemed to me all summer that the project is beyond the scope of the construction companies expertise. They don’t seem to be working diligently and it appears they don’t really know what they are doing. Of course I can’t say that for sure, but it certainly appears that way. Restoring these stairs seems like it is probably a pretty specialized job that a lot of these construction companies probably don’t have a lot of experience with. Demolition was one thing, but restoration is another. I applaud and
appreciate the efforts to restore and retain the historic steps. They are beautiful. I hope this will actually happen!

At 3:30 pm, I drove past Murray Avenue School steps and found 2 men by a truck. I asked them when it would be finished. He said they were from the “new contractor” and the old contractor was fired. He said they have not gotten the paper work, and have not been formally hired. So the job in not active. Can we report on the real story please, and get more details as to their projected finish date. There is no one working there.

I don’t think the delay had anything to do with
a new contractor being hired. For weeks, I would see men standing around
doing absolutely nothing. I mean nothing, except looking at each other.
One day, I couldn’t help myself and rolled down my window and shouted out
“START WORKING.” So it is no surprise they have not made
progress in restoring the steps. In my humble opinion they seem inept,
and have no supervision. Oh, one Sunday they decided to do some
demolition. Of course, why not destroy our peace and quiet on a weekend day. Yes, they are very good at “destroying” but don’t
know how to rebuild the steps. Soon they will make Murray a one way
street for a few hours a day. Now that should cause total chaos. I
am trying to figure out how I will be able to drive out of my driveway during those
hours. I guarantee you there will be some harried mother that will park in my
driveway for a few minutes, trapping me in the house. BTW, did they mention this plan to the County, since they control Murray Avenue? The police didn’t seem to know this when I called.

I was glad to read there was a new contractor. The contractor who replaced, instead of repairing the wall which the bond issue provided, did the community a disservice. He cited cost, but it’s likely another contractor would not have charged more than the bond issue provided for repair.
I am reminded of the outrage among many every time I pass the school and see the result. As one commenter noted, that experience will hopefully inform the replacement of the stairs. https://larchmontloop.com/blog/rant-rave/murray-wall/