This was the MTA’s official statement regarding the delays during Wednesday morning’s rush hour commute to Manhattan:

“Two disabled trains on the New Haven Line added to the morning’s delays: an Amtrak train stalled in the vicinity of Fairfield at approximately 7:40 AM, taking one of two available tracks out of service (two of four tracks in the area are out of service to accommodate catenary work); and a train became disabled at Larchmont at 8:09 AM, resulting in delays to inbound service on the lower portion of the line.” 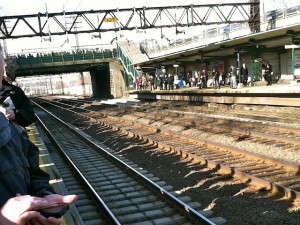 The first train to NYC actually arrived at approximately 9:15 a.m. (I had been waiting for the 8:21) They made us all go to the other side of the tracks because of the broken-down train.

If you look closely at the attached photo, you will see the masses of people on the Chatsworth Avenue bridge and the silhouettes of hundreds of commuters waiting on the platform for the train. I was one of the lucky ones to board that first train!