Neighbors are calling it the “Metro North Massacre.”

The Metro North Railroad Authority clear-cut hundreds of trees along the train tracks that run behind Harmon Drive from Rockland Avenue to Weaver Street in Larchmont and Mamaroneck.

“All trees and vegetation have been cut down, destroyed, and eliminated leaving the backyards of homeowners fully exposed to the train. These trees had served as a buffer zone to noise and air pollution as well as a privacy protection which allowed families to enjoy their property without being on display to commuters several times a day. This action by Metro North will surely have a negative effect on property values not only for these homes, but every home in the neighborhood as listing price is based on comps in the area,” writes a resident on nextdoor.com 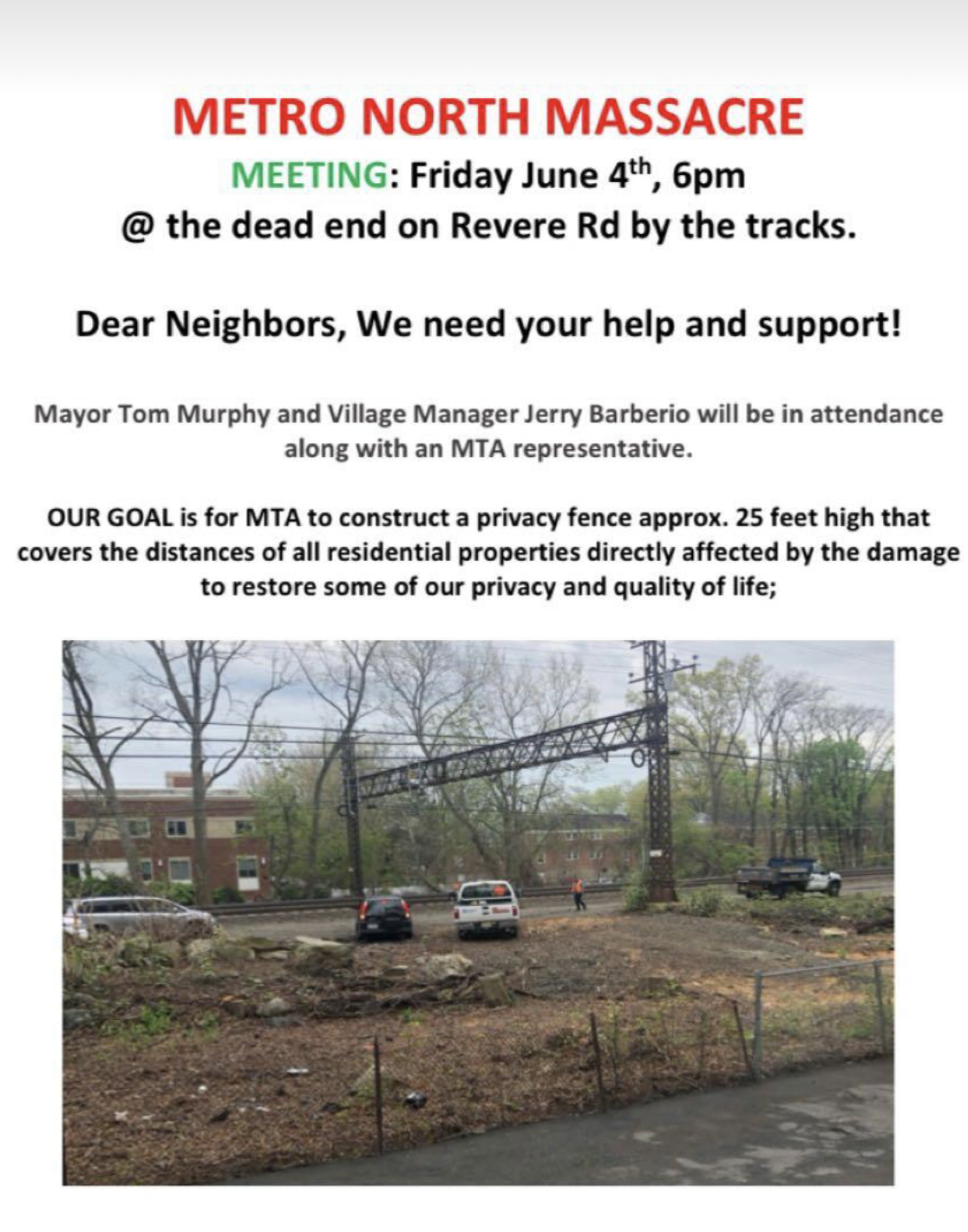 A Meeting will be held on the Revere Road Dead End, on Friday, June 4th at 6:00 pm, to address the action. Local officials will be in attendance with an MTA representative.

Near English Place in Mamaroneck, MetroNorth is cutting down trees in people’s back yards. They said they had the homeowner’s permission, but when I asked one of the homeowners, she said the MetroNorth workers told her the trees in her back yard had to come down. That really isn’t permission.

Wake up people, the railroad falls under federal jurisdiction. No Hamlet, burough, town, city or state can regulate them. Stop looking at the local rules and regulations. Try reading the CFR. Even the town knows this. It happens every day all throughout the country. All this information is readily available.

Metro North Railroad (MTA) is a NY State agency; The governor appoints some of the board members. What the State does have power over are the $$ the MTA gets

The town may require a permit for a homeowner to remove trees but that doesn’t stop the mess they are making of the town. A builder on Forest cut the trees first then got the permit. No problem! They are allowing builders to knock down a home and the mature trees and McMansion to the edge of the setbacks. Awful!!

Metro North routinely clears trees near tracks because fallen trees can be a hazard to trains. Moreso on the New Haven Line, where trees can take down the power lines in addition to blocking the tracks.

Second, the tracks and trains have been there longer than ANYONE who lives near them. If you’re going to buy or rent a home near the tracks, this is a known risk.

And air pollution? The vast majority of Metro North and Amtrak trains on the New Haven Line run on electricity, not diesel. Even the occasional diesel train creates much, much less pollution than a trainful of people driving themselves individually.

Where were our Town officials when 100’s of trees were being cut down?

I hope everyone who is complaining are not the same people who will complain when a tree comes down and interrupts service complaints why the MTA did not do tree trimming.

lol you clearly missed the entire point; Most if not all of these trees were healthy; This was just incompetence; Tree trimming and deforesting / dumping potential carcinogenic gravel in place are 2 entirely different things, both with very different outcomes

Trees, like any living thing, are healthy until they aren’t. The needs of the many (riders) always outweigh needs of the few.

ever heard of creosol, “Train boy”

Something further to consider is that with the hundreds (thousands?) of tons of this gravel being placed so very close to the stream running thru this area, how badly might it affect the water quality in the area? Suggest we all read the water quality reports carefully as they come out over the next year or 2.

Oh no! How unfortunate that those affected aren’t capable of putting their own fence up. They did what needed to be done and as a community member and frequent rider I fully support them improving ride conditions. Better luck next time Karen’s!

Hope there aren’t a lot of community members like you. This is disgusting. The impact goes way beyond the people affected- it’s an environmental problem as well. Improving train service would be great, but the way to do that is not by clear-cutting hundreds of trees, most of which were not even in the immediate train vicinity. The way to improve is to properly maintain – something neither you, nor the MTA can comprehend.

Jacob, you obviously haven’t taken a stroll to see the devastation, deforestation and gravelling of this entire area. Your reply is ignorant and ill-informed. This is an environmental nightmare in many ways – wildlife nests destroyed, hundreds of elderly healthy trees cut down, tons and tons of heavy gravel replace the lovely green forestation that bordered the railroad property. It now looks like a poor appalachia area and yup, that will be reflected in property values here. The homeowners along the tracks do have trees on their property but if you would take a moment to see what is actually going on…the railroad tracks are raised so homeowners need 25 to 35 feet height all along their entire border of tree cover to mitigate what was cut down. So feel free to call us “karens” for objecting and meantime, continue to enjoy your nice “ride conditions” that were rarely, if ever, impacted by trees or branches on the tracks. I forget…who is the “karen” here?

Imagine complaining about what someone does with their own property, on their property. The trees were cut to prevent them from falling onto the wires and disrupting service during inclement weather. These are the same people complaining when service is impacted. Grow your own trees or pay for a sound wall if it’s such an issue.

That is a bunch of nonsense; If a homeowner kept their property like junk, distorting the neighborhood, the town would be on them; What MTA did in the area is not just cutting trees but deforesting the entire stretch, it looks HORRENDOUS; and it exposes homeowners; Grow some sense;

James is right; MTA is a neighbor in this case and did an extremely savage act; And the residents are pretty powerless against it; Force them to grow trees that they must wait many years to regain some sense of privacy? They cant even put up a tall enough fence to obstruct the monster;

Ahh so MTA decides to dump toxic gravel and cut down a forest directly adjacent to houses, and They should just fork it up because their neighbor acts like an incompetent slob? Like the other guy said grow some common sense.

hey! come take a look around and take a sniff! The Tin foil hat conspiracy theory will evaporate.

Unreal; Complete disregard for the neighborhood and homeowners; Disgusting

How so? It’s their property. They can do whatever they want. This is not HOA. If a neighbor wanted to cut down all the trees on their property they are free to do so.

some new text
Reply to  Sam

Sam, that is absolutely incorrect. You are NOT free to cut down trees on your property. You must receive permission from the town and they are not likely to grant a tree removal permit to cut down even one healthy tree let alone deforest your entire property. MTA is exempt from this. Those of you who havent seen the devastation here, I suggest you come by and take a look around. MTA deforested the entire area. This was completely unnecessary as most of the trees posed no danger to the operation of the trains but MTA will no longer need to send out pruning and maintenance crews since there’s nothing left to prune or maintain. It looks just awful to the point that property values are going to be affected.

Townie
Reply to  some new text

The MTA disregarded residents, the environment and common decency. But it’s untrue that the ToM restricts tree cutting on properties – except for about 1% of properties. The Town exempted all properties under half an acre from all tree cutting restrictions so it only applies to a handful of properties. The Tree Code is just window dressing – the Town spends around $1 to protect or grow trees for every $30 it spends to cut trees down.

Where did you see this “exemption” in the town code Townie? I havent been able to find anything about it. Only that tree-cutting requires a permit and that trees are respected here.

townie…so…uhh by your own words, is it “less than 5 percent” or now your story is “one percent” of properties in the town that are supposedly “exempt” from local ordinances regarding tree cutting permits?? please cite where local ordinance “exempts” most properties? Hint: they DONT.

Regarding cutting down trees on your own property, you must apply for a tree removal permit prior to removing any tree even if it’s dead. Here is the 6-page permit application you must submit.:

The Town law requiring permits only applies to less than 5% of properties. It is a paper tiger.

I suggest you read Chapter 207 of the Town code.