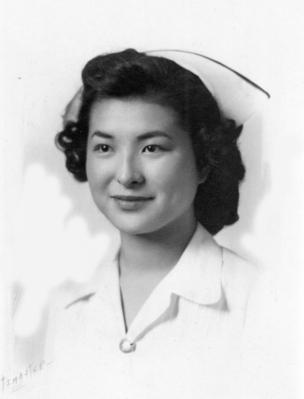 Marie Joanna Peterson died unexpectedly at her home on November 25, 2014, at age 90. She was born in Seattle, Washington, on June 5, 1924, to Robert Y. Kawamura and Yasuyo Watanabe Kawamura. When she was 17, Marie was incarcerated with her parents in a Japanese internment camp in Idaho, Minidoko, along with 9,000 other Japanese-Americans. Marie’s older sister Mary, who was in nursing, was able to arrange Marie’s sponsorship by the Catholic Church in Minneapolis, where the two sisters shared a room in the basement of a hospital. There she completed her secondary school studies and enrolled at the University of Minnesota, where she studied nursing and met her husband, John Peterson. Upon graduation, she joined the Army Nurse Corps and served in the burn units at veteran’s hospitals in Tennessee and California.

John and Marie married in 1950. As a GE executive, John and Marie and their five children moved from Schenectady, NY, to Kansas City, to Chicago, to Louisville, and finally to Fairfield, CT. As Marie recalled, “I knew the next transfer would come when I finally got the curtains up.” John retired in 1984 after 37 years with GE. After he died in 2004, Marie moved to Larchmont where, despite the creep of vascular dementia, she maintained her legendary sweet demeanor. She enjoyed visiting her children, painting, and reading The New York Times and the Paris Review. She was a fan of George Clooney, Nora Ephron, and Derek Jeter, and appreciated the antics of the Golden Girls, Woody Allen, and “Modern Family,” and most of all enjoyed dining out in Larchmont and laughing with and loving her family.

Visiting Monday morning 11 am until noon at John J. Fox Funeral Home in Larchmont. Funeral service will start at noon followed by an interment at Oak Lawn Cemetery in Fairfield, CT.

In lieu of flowers donations can be made to Dr. Without Borders.