Many Westchester Parents Opt-Out of ELA 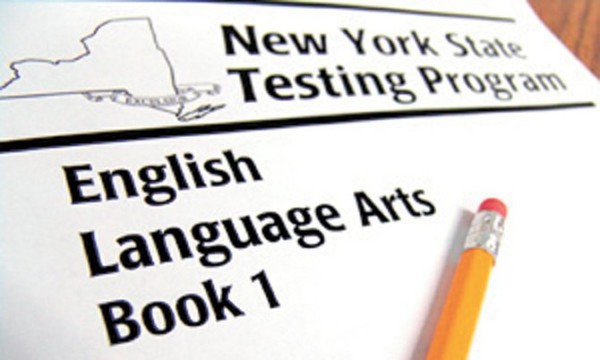 For parents, kids and educators in New York State, this is an anxious time of year. All endure several days of ELA (English Language Arts) testing by the State in skills like English, Math and Science.

Children as young as Fourth Grade sit through several 90-minute sessions during several days over the course of two weeks, writing essays and solving equations.

But the children aren’t the ones that are graded.

As part of the Common Core Curriculum, New York and other States rank teachers and school districts on how students do on these tests.

Mamaroneck Schools Superintendent Robert Shaps posted on his blog Monday that “the current debate on how to fix public education in New York State reads like a Monty Python movie.”

Many parents have chosen to opt-out of these tests with a Refusal Letter.

“I’m refusing the tests because I believe they will be used inappropriately to harm our teachers,” writes one mother on the Westchester Opt-Out Facebook Page.

Teacher modules that can be viewed at www.engageny.org, provide “scripts” for teachers in the classroom. Teachers, according to a recent report, “are not allowed to use their own methods to introduce the material, manage the classroom, or share their own wisdom. Students are not encouraged to connect the material to their own lives, events in the world, or things that may interest them. The script tell the teachers and students, at all times, what to say and do.”

But according to the Foundation for Excellence in Education, “the new standards make sure students are learning and absorbing the critical information they need to succeed at higher levels.”

The New York Times reports at least four states have opted out.  Resources from this movement in New York are posted here.

The text of this letter is posted below.

Thank you for all that you do for our school.

I am writing to respectfully inform you that my child, (name), under my guardianship and advice will be scored as a “refusal” with a final score of “999” and a standard achieved code of 96 on all State testing including ELA, Math and Science as described in the 2014-2015 NYS Student Information Repository System (SIRS) Manual version 10.2 on page 63. Please note that a “refusal” is not the same as “absent” as they are defined differently and scored with different standard achieved codes on page 63 of the SIRS Manual. Also note that on page 27 of the 2015 Edition School Administrator’s Manual it is explained that “The makeup dates are to be used for administering makeup tests to students who were ‘ABSENT’ during the designated administration dates.” My child will specifically be scored as a “refusal” not “absent” and therefore my child will continue to receive a free and appropriate public education in his/her regular classroom environment during the administration of all makeup test periods as this letter provides written verification of a “refusal” for all tests.

I would ask that the school please provide an alternative activity for my child during administrative sessions of testing (not makeup tests, as my child will be in his/her regular classroom environment during makeup tests). However, I understand that an alternative activity is not required on the part of the school. If you are unable to provide an alternative activity for my child I would ask that you please utilize the provision of the NYS Educator Guide to the 2015 Common Core ELA (Math) Tests which, on page 9 (page 7 for Math), explains “When Students Have Completed Their Tests….that student may be permitted to read silently.” I am reserving the option of removing my child from school during the test administration session depending on the emotional anxiety state of my child on the day of refusal and whether or not the school will provide an alternate activity for my child.

In addition, my child will not participate in any stand-alone field testing administered through the NYS Education Department.

Thank you very much. I look forward to a great end of the school year.