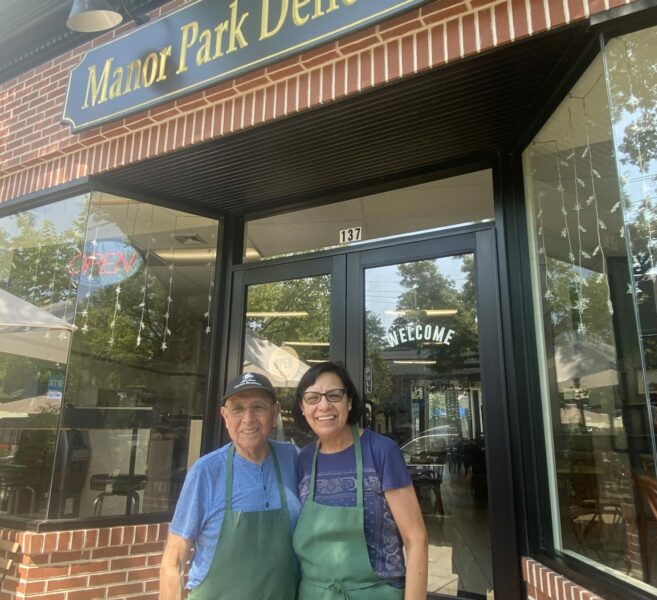 After 31 years waking up hours before dawn, six days a week to help run Larchmont’s cherished delicatessen, Marta Abregu looks most forward to finally getting a chance to sleep in.

All week people have been stopping by Larchmont’s Manor Park Deli to say goodbye and wish good luck to Marta and her husband, Tony, who are retiring and closing the doors of the place on Saturday, August 28.

For more than three decades behind the counter at Manor Deli, Tony and Marta have greeted and served locals stopping in for a quick coffee, snack, salad or sandwich often coming to know the customer’s orders before they say it aloud. Tony fondly looks at the tables and points to where moms would come in and sit with their kids on a regular basis. He remembers when some of them were pregnant and later when they stopped by with a newborn baby.  Now he says, those children have grown and and married to return with their own babies.

But everything comes to and end. Manor Park Deli, especially popular with middle and high school students, will be closing its doors before the 2021-2022 school year begins. One young adult says he’ll miss the Abregus more than the deli. “Sure the food was great, but they really looked after us when we were in there, almost like parents.”  He said he planned on stopping by to wish them well.

Tony and Marta plan to remain living in Larchmont, just a few blocks away from their old business.  It’s unclear what business might replace the Manor Park Deli’s spot on Larchmont Avenue.

Such a wonderful part of the community for such a long time. Our boys were on the same soccer team for many years and they were as lovely at the field as they were behind the counter. I’m sure they will be missed by several generations.

We will miss you!!!! Enjoy your retirement, you have earned it!!!
Love you guys,
Amy The Cut Above