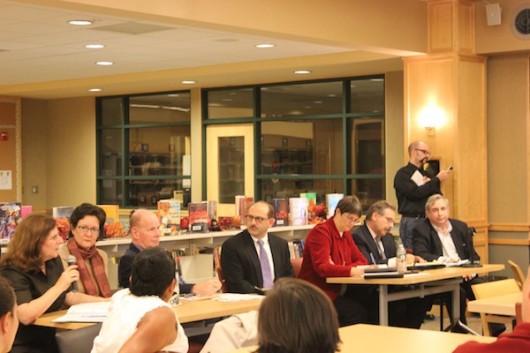 Anonymous, you’re tilting at windmills. I SAID, very clearly, that I AGREE with the courts decision.

It’s my OPINION, and that of many others, that the decision was a surprise – clearly no-one in the police department or the school district thought their arrangement could pose a legal problem. It’s a bit of a novelty to be told that in certain circumstances a teacher in a school might have to read a kid a Miranda warning in order for evidence to be admissible – but the court clarified that.

This is the comments section, it’s here for people to discuss, and express their opinions, so long as they keep it civil and refrain from personal attacks. So I’m sorry, I’ll continue to give you the benefit of my opinions – which, I have to say, appear to be better reasoned – and better supported – than yours.

And Mike please spare us your opinion it’s what the court had to say about the matter….it’s the court opinion that counts. The court found the student was denied his constitutional rights by or as a direct result of Dr. Shaps actions

Dr. Shaps wasn’t charged with a crime, however, the court found the student was denied his constitutional rights by or as a direct result of Dr. Shaps actions. Dr. Shaps has a legacy….not one to be proud of.

To the first anonymous: Dr. Shaps didn’t do anything ‘illegal’; he wasn’t charged, tried, convicted or sent to jail for anything! Everyone knows this, and by overstating – no, lying about! – what happened you do your argument no favours.

What happened is that when the drug-dealing student was prosecuted, the court decided to disallow the evidence of the drugs themselves, since they decided the assistant principals involved (not just Dr. Shaps) should have read Miranda rights. He did NOT do anything illegal, he did NOT arrest anyone, wrongfully or otherwise. He failed to follow what the court clarified as being the required procedure in order for the drugs to be admissible as evidence. That’s ALL.

I don’t disagree with the decision of the court, but I think all would agree it came out of left field – it was a surprise to everyone. To my knowledge no court had ever previously ruled that a *teacher* had to read Miranda rights before consensually searching a student, and no ‘smart intelligent individual’ expected the outcome.

Stick to the truth.

Let me carefully spell out the facts to our resident lawyers. Who violated the students constitutional rights…correct Dr.Shaps! Why?….correct he was deemed to have illegally searched and arrested a child. It went to the top court…the Supreme court of New Hampshire and they upheld unanimously the lower courts decision. Again it’s not open to debate the court ruled in favor of the child. A smart intelligent individual would have allowed police work to be done by the police.

Mike – Thank you for pointing that out for me, and I respectfully stand corrected on those points. I can’t state “you must argue with the facts” if I had incorrect facts as well. I did, in fact, misread that in the report.
As for the proms, there are not “pat-downs” per say, but they do search limos, et cetera. Some districts have even resorted to banning limos and requiring students take buses (coach of course) for a prom that leave from school..
Pleasure conversing with someone who debates with facts.
If we could all do that, perhaps we could have discussions and actually solve problems! That’s exactly the problem with this situations. It appears that once one’s mind is set, they shut-off to facts/other points of view that contradict what THEIR truth is.
No one can argue that you don’t keep an open mind and research your facts then give an opinion. Perhaps you can resolve this entire situation peacefully!! LOL! Run for an office, few candidates present the facts through a clear lens anymore! KUDOS!

The dismissal in the NH case *was* based on Miranda, not privacy rights. If you read closely they decided that, although the teacher was still a teacher, because they had a formal ‘agreement’ with the local PD in cases of suspected drug dealing in the school, that simple fact was enough to make the teacher, in a legal sense, an *agent* of the police – and a police officer, or a police *agent*, DOES have to give the Miranda warning before dealing with a suspect. So your facts aren’t quite straight there – it all hinged on the teacher being deemed an ‘agent’ – something that legally came out of left field but is probably correct.

Now, “In districts throughout NY, they search EVERY person going to prom for drugs & alcohol…” – I would venture to suggest a blanket 100% search of that nature, especially if it’s an intrusive personal search – pat down, frisk etc. – with no reasonable suspicion whatever is most definitely illegal and unconstitutional. You don’t lose your 4th amendment rights at the school door – or the prom door! If anyone tried to search one of my kids *with no reasonable cause* there would be hell to pay; I have lawyers and my kids are getting good at karate!

Amen Mike… I can value whatever you write because you back it with facts!

Sharon – you’re doing exactly what the other person stated… You only read the first part. Please read it again… THEY WERE NOT GIVEN THE SAME TEACHER FOR TWO YEARS & IT WASN’T DONE TO THE SAME PEOPLE. The mom’s son was in kindergarten when she started this last year. The teacher in question taught kindergarten for the two years in question… It’s impossible under those circumstances, by what you’re stating, for an entire class to have the same teacher for two years in a row… Did they retain the entire class?? She hasn’t taught first grade.

Also, obviously you condone a child was caught with a cigarette laced with LSD.

In schools now, because of Columbine, they only need to ask permission. Would you feel the same if he found guns that a child was planning to use on your child… I bet then you’d praise him. What if the kid actually used the LSD or gave it to another child who “tripped-out”, hallucinated and killed someone or themselves.

In districts throughout NY, they search EVERY person going to prom for drugs & alcohol… RESEARCH IT. I’ve been witness to parents who provide drugs & alcohol to their kids & when they end-up with toxic poisoning, they cry & sue the school for not knowing they had it. Stop blaming the schools and start being parents.

FACT: Miranda rights apply to law enforcement only. It was base on a woman named Miranda who was arrested and didn’t understand what the police were arresting her for. With the passing of the Miranda rights POLICE are obligated to explain to people their legal rights. SCHOOLS are only obligated to ask permission. That’s why they DIDN’T use the Miranda law as a defense, they used violating their privacy laws.

By your comments, I completely agree with the other writer… Know your facts, then write an opinion. You’re destroying so many people’s reputations by blogging without facts. So sad we always blame schools instead of what the real problem is. Poor teachers! You try doing their job!

As for segregation, a statistically imperfectly even ethnic balance does NOT equal segregation, no matter how much you try to inflame the argument by repeatedly using such an emotive term. Segregation implies 100% segregation, as practiced in Jim Crow days, and deliberate intent to do so (which everyone agrees was absent – read the latest ‘Anonymous’ post).