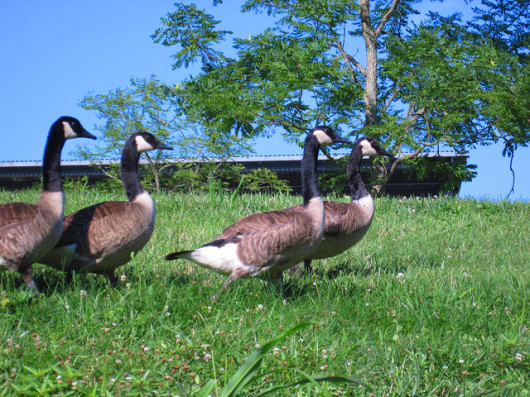 Mamaroneck Village is planning a geese cull this summer, when geese molt and shed their feathers so they cannot fly, and truck them away to be euthanized.

The Village says it is overrun with goose droppings in local parks with some washing into local waterways.

A group called Westchester 4 Geese says it plans to take action. “This is not a choice between children and geese. It’s a matter of human decency in working together for the good of all, including our geese and their babies,” says Kiley Rosenblum.

470 geese were captured on the Sprain Lake Golf Course in Yonkers last summer and sent to an upstate processing plant to be slaughtered. Scarsdale’s plan to round up and kill some of the geese that hang out at the pond near the village’s library was apparently scrapped after opposition.

Mamaroneck will be working with the U.S. Department of Agriculture to round up and kill the birds and donate their meat to area food banks. Rosenblum said the village had signed a multiyear contract with the USDA, which will cost about $10,000 per year.

“The excrement gets washed into the Mamaroneck River from Columbus Park. You can’t even walk in the Harbor Island sand, it’s so dirty, says Rosenblum.

“Young kids can get sick from coming into contact with goose droppings.”

“Euthanized”? Let’s use the correct term here, “slaughter.” Do you think these animals don’t feel pain and fear? They are not disposable. Why do we feel the need to package the world up in a nice neat little bow…it’s not going to work. I bet children have a much bigger chance of getting sick just from going to school, than from goose poop. This is just horrific unacceptable behavior.

This doesn’t make sense. They have only recently purchased a goose poop removal machine that they report is working very well cleaning up poop. Why not just give it a chance? They will never be able to rid the waterfront of waterfowl, so it is best to just clean the poop and implement a birth control program if need be. Learn to live with wildlife and manage conflicts humanely. Isn’t that way we teach our children? The killing serves absolutely no purpose.