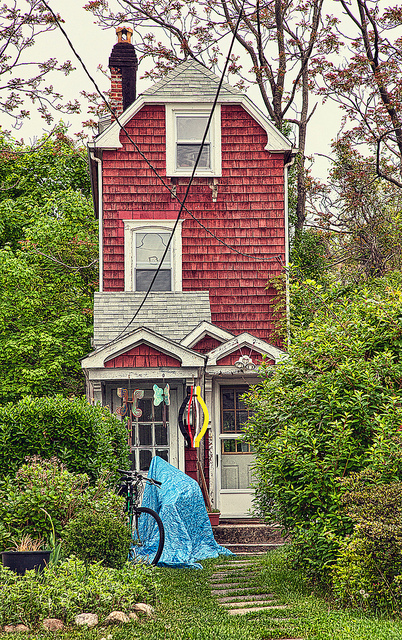 Mamaroneck History tells us The Skinniest House in Mamaroneck is for sale.

Looking to own a piece of Americana? Now you can own the “Skinny House” in Mamaroneck!

Placed on the National Registry of Historic Places in 2015, this 10ft wide x27ft high house was built in 1932 by Nathan Seely and its story is one of true American ingenuity & community.

Built on 12.5x100ft lot, which was given to Mr. Seely by his neighbor Mr. Santangelo during the Great Depression after Mr. Seely lost his home & business. Mr. Seely used salvaged and recycled building materials including railroad ties, windows, banisters and even a chicken coop to incorporate into his house.

The house “showcased many amenities considered very modern at the time,” according to the submission to the National Park Service. The home has only been owned by the Seely & Santangelo families. Property has been lovingly maintained throughout its history and recent updates include newer kitchen. Lives like 2 bedroom home.

Here is your chance to truly own a historic piece of Westchester History. Home sold as is.

One thought on “Mamaroneck’s ‘Skinniest House’ is For Sale”