Mamaroneck Votes No On BLD Project 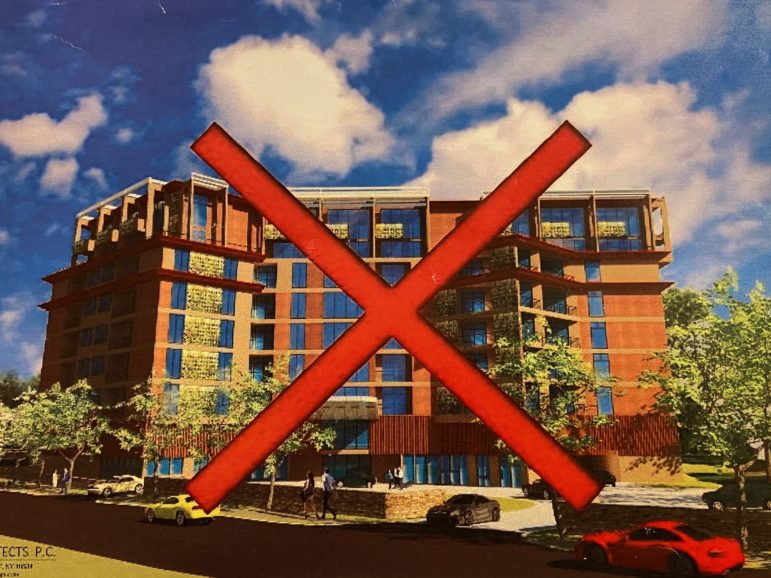 They shot it down in record time.  The proposed 9 story, 98-unit apartment building on the BLD Diner site was nixed by the Town Of Mamaroneck Wednesday night.

It turns out the developer’s timing couldn’t have been worse.  The Town Board unanimously voted to reject a proposed zoning change for the Boston Post Road property, essentially blocking the development. The Town Supervisor and Council members told the owners the proposal comes just as the town is beginning a comprehensive development plan.  “This is just too big of an ‘ask’,” said Town Supervisor Nancy Seligson.

More than 100 area residents filled the meeting room sitting alongside a mural of the Premium Marsh Conservation Area. Those very marshlands sit adjacent to the proposed building property line and several residents expressed concern the development might damage that protected sanctuary.

There is no building moratorium on the property but the sheer size of the proposed development requires zoning map changes the Town Board simply isn’t willing to make.

“I am very concerned about considering a zoning map change in light that we about to embark on an update of our comprehensive plan,” said Seligson.

The concern was echoed by all the council members. Councilman Jeffrey King who called it a “massive building” said, “The biggest component (of any project and comprehensive plan)…is the input from the community…. We are listening to the citizens, parents with children in the schools – we’re listening to everyone. To proceed without listening and without getting total feedback from the community, at this time,  I cannot go forward.”

Gregory Katsaros and his 2399 Boston Post Road Realty Corp currently own and operate the popular BLD eatery. Mr. Katsaros and other family members were visibly disappointed after the unanimous council vote against the zoning change. Katsaros did not choose to speak at the meeting, instead leaving the pitch solely to his attorney. They did not want to comment after the vote.

Dorothy Constas, a homeowner who was ready to speak out against development instead tearfully thanked the Mamaroneck leaders saying that in the current political climate ” I almost feel like l’m not being heard but here I am so touched and thankful for all of you.”