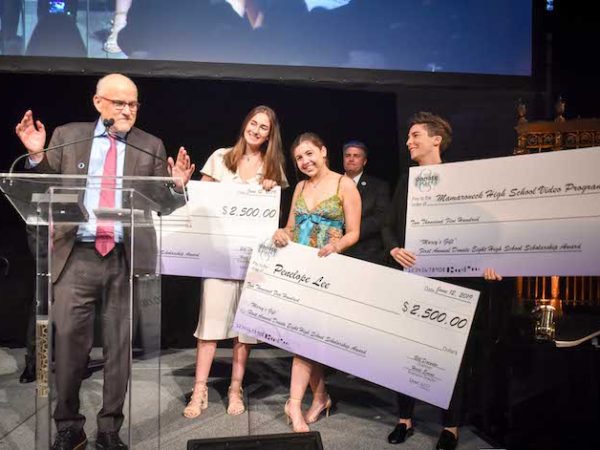 A Mamaroneck High School student combined her passion for filmmaking with her love for a best friend, the recipient of a life-saving liver transplant, and was honored for the result.

LiveOnNY , the organization which coordinates organ donation and transplantation in the greater New York area awarded Louisa Tantillo, a 15-year-old MHS sophomore, a $2,500 scholarship for her film “Take It In Stride” – a touching portrayal of her classmate, Penny Lee, and her family’s journey since her transplant at three months old.

“Not only am I telling this story about Penny, but I was telling the story of what so many people have gone through when they receive an organ, which made it so meaningful to me,” said Tantillo, who hopes to attend NYU for filmmaking . “I wanted to make the film to show what she goes through every day as a liver recipient. I had no idea, and neither did the kids at our school.”

Larchmont resident Lee, 16, also received a $2,500 scholarship for her part in the film. Friends say she never complains about her medical condition, the multiple surgeries and post-op visits she has endured, or her daily regimen of anti-rejection drugs.

“When I heard about this high school film produced in my own community and saw it with my own eyes, I was moved beyond words,” said Lee Perlman, Chairman of LiveOnNY and a resident of Larchmont.

By the way, 5 million New Yorkers have signed up on the state registry, only 35% of eligible New Yorkers, putting New York last in the country.