Mamaroneck Skates into Another Win Against ETB 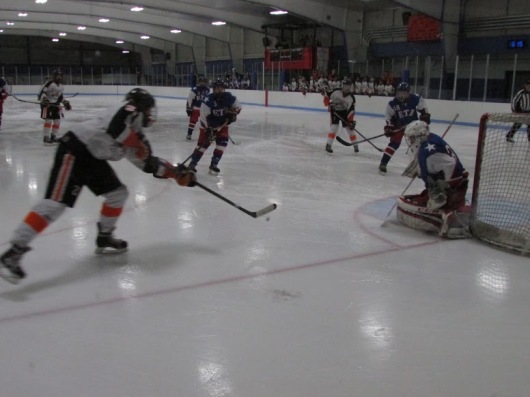 The Mamaroneck Tigers continued their dominating winning ways with a decisive 5-0 victory over Eastchester/Tuckahoe/Bronxville.

Mamaroneck dominated the game from start to finish against EBT, drawing a penalty immediately after the game started and didn’t allow EBT to get a shot on goal until three minutes left in the first period. Unfortunately for EBT it was only their second game this season so they were no match for Mamaroneck who are undefeated on their home ice (5-0) this season.

A controversial call that Mamaroneck benefitted from in the first period may have let out some of ETB’s steam when the referees ruled a goal in Mamaroneck’s favor when the goal grease was crowded, which was argued by EBT’s coach, but to no avail.

Mamaroneck was in firm control after the first period, taking a 2-0 lead heading into the second period. EBT looked lost in the first period, but looked even more out of it during the second period. They had several opportunities for an offensive flurry, but managed to squander it, managing no shots on goal in the second. It also didn’t help them that Mamaroneck’s defense was on their game and stopped any and all chances.

By the end of two periods, Mamaroneck had outshot EBT an incredible 29 to seven. Junior Will Arbo led the charge, having tallied two of the five goals. Mamaroneck also saw goals from senior James McMillan, junior Jason Bienstock and junior Ben Shapiro. Sophomore goalie Tom Spero kept EBT at bay in the first two periods before being replaced since Mamaroneck was up 5-0 going into it. 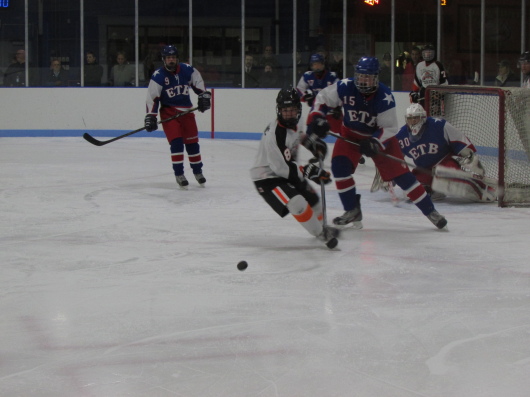 EBT tried to take advantage of the goaltender change by Mamaroneck and were more aggressive by sending 14 shots on goal at Mamaroneck, but it was like shooting at a brick wall because nothing was going through. EBT ended up with 23 shots on goal while Mamaroneck shot 33.

The arena was filled with Mamaroneck supporters as they watched their team skate to another win.

Mamaroneck is undefeated at home and improved their record to 11-4-2. They return to action on Friday night January 23 at home against John Jay.