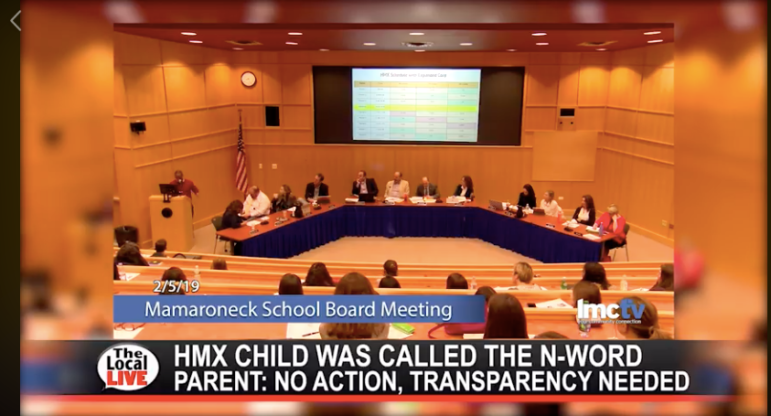 A letter to the community from Mamaroneck Superintendent of Schools Robert Shaps addresses concerns about an alleged incidence of racism last December by a parent of a middle school student.

We first reported on this shortly after the School Board Meeting.

The child’s father spoke before the public School Board meeting saying that the District was unresponsive to his complaint.

We write today to address the concerns raised by a parent about a specific incident that occurred recently among several middle school students. At Tuesday’s Board of Education meeting, the parent recounted a painful incident for his child (and the family) that occurred just before the holiday break in December, in which an offensive racial slur was used during an after school club. Some students were apparently singing the rap song “Moonlight” by the artist XXXTENTACION, which includes the aforementioned racial slur. From there, a dispute among students ensued.

It is without question that this incident occurred (though some of the facts are in dispute between/among students), and for that we must remind ourselves of our responsibility to be ever-vigilant in modeling appropriate behaviors and expecting our students – even very young middle school students – to live the important values that we stress as a school community.

Simply put, there is no place for hateful words or actions in our school district community.  We place a priority on creating and maintaining a safe learning environment that promotes respect for all. We are proud of our diverse school community and its efforts to support our culture, and will continue to work within all avenues to reinforce our values of tolerance and respect.

To be perfectly clear: the district did not initially react properly to this matter (emphasis is author’s).  We did not immediately contact (same day) the parents of the students who were involved, and this was wrong. It should not have taken an email from two of the parents to prompt initial action on our part, which took place two days later. We apologize for not acting more swiftly, as we should all be aware of how a lack of timely response can be understood as being indifferent to the very real issue that took place. Further, we believe the seriousness with which we addressed this matter may not have been properly conveyed, which only created needless complication and emotional upset.

The parent who bravely relayed his concerns at Tuesday’s meeting has drawn attention to this issue on a website. We respectfully disagree with several of the facts and characterizations made on this site. Specifically:

We will continue to engage our students in conversations about race, ethnicity, and other aspects of living in a diverse world in a manner that supports tolerance and respect. We will continue to utilize district resources to examine and refine our programs and curriculum to support these  values. And we firmly pledge a continuation of this conversation.

Why are they justifying it. They diminish the man’s point in the meeting and they completely minimize the situation. If it’s just a song then why did they say it. They make it seem like it’s all on the rapper and it definitely didn’t happen that way. Calling the parents and the child a liar and completely siding with the kids at fault diminishing the word and it’s hateful history I’m ashamed of this school. We need to join together and call for change to get rid of the mentality that it’s just a word in a popular song. The kids should be severely punish per because, that’s not how it works in the real world.

I am so happy that we found this website before buying the house in Larchmont.
The “adults” have ruined this town.

It does not mean the writer does not believe them. Unless and until there is some kind of ruling/adjudication/final disposition of a legal charge or claim, it remains something that is unproven — an allegation and not a fact.

Whatever was”done as a consequence to the student ” is none of anyone’s business, except the school, the student and their family. Children/students at Hommocks are between 11-14 years old. School disciplinary issues are handled by the school and the public should never be privy to this.

That’s why these things keep happening! The public should be made aware and the district/community should stand together affirming that hate is not tolerated here! Being willfully blind to the happenings in the school system will only hurt children.

Let me know when your next parent teacher conference is. I’d like to show up and publish the results on the web. SMH. Disciplinary issues not involving your child are none of your business.

I am wondering what the school board and Superintendent did as a consequence to the student who called the N Curse to multiple students without naming the students involved. What steps were taken?

I would hope that they didn’t do anything. I would expect that dealing with building level issues like this would be handled by the principal and administrators at Hommocks rather than the School Board and the Superintendent of Schools.

You hope they didn’t do anything? It’s interesting and sad you think that way. If you listened to the parent, that was the problem to begin with, nothing was done at the building level. How would you feel if your child was verbally harmed or physically harmed and no one did anything? Shame on them!

I think racism is bigger than a building issue .Of course it is fine for them to do nothing unless it is your kid . You seem to be very dismissive of the issue and your email appears to minimize it .I do not think it is going away OCR is involved .