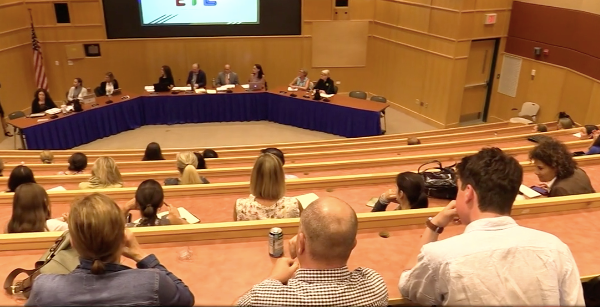 Parents, School Board members and staff and a scrum of TV cameras filled a Mamaroneck District School Board meeting Tuesday night, as officials and community members discussed school communications and safety protocols, after three incidents in the past week where parents were informed of the threats to Hommocks Middle School by robo calls.

Superintendent Dr. Robert Shaps says the three threats are unrelated and “not credible.”

Shaps said, however, the end of the school year comes with increased police presence and security personnel after the three incidents.

Tuesday June 11, school administrators were informed that a middle school student threatened to harm other students. The next day, a robo call from District spokesperson Debbie Manetta informed parents that there was no threat to safety and that students and staff were safe. 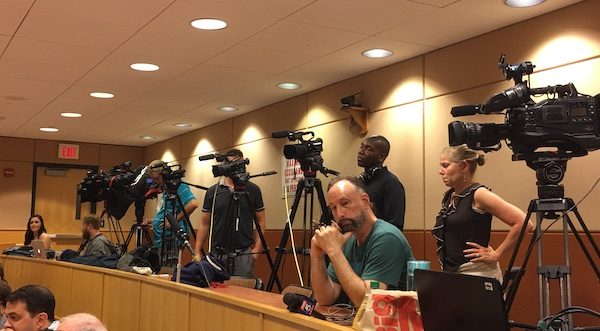 Friday, June 14, a lockout was issued, Shaps said, “after a parent and student relayed…threats made by a student who was not attending school.”

In Friday’s incident, Shaps said the communication initially given to parents indicated the District was informed of this threat by police, but that was a mistake. He also said their announcement that the offender was in custody was also incorrect.

On Tuesday, June 18, police notified the District that a former middle school student living in or near the Bronx made a social media threat. He was pictured on Snapchat holding what appeared to be a gun, with the caption, “Don’t go to school Monday.”

The District informed parents and the NYPD advised that there was no active or credible threat, Shaps said.

More than a dozen parents addressed their concerns at the meeting Tuesday night. Most cited a lack of timely communication that would have allayed suspicion and fear which led to rumors and outcry on social media.

Tania Thomas, a parent and former School Board candidate, asked, “What is causing these incidents in our community? We have had three threats of gun violence in less than a week…there is a problem of unaddressed bullying.”

She added, the community needs to “hold the District accountable, because if it comes down to the fact that the District is sued, I’m speaking as a homeowner, we will all pay for it.” 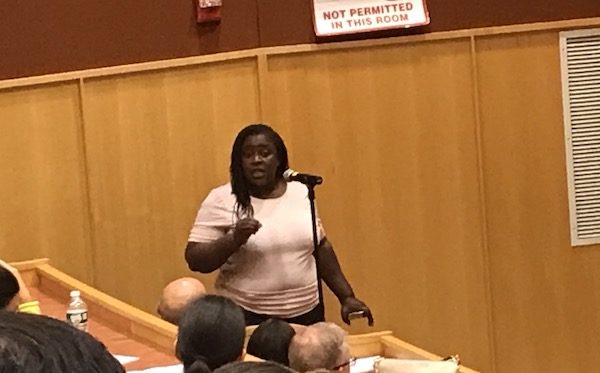 “We need accountability. We need to feel safe and we do not feel safe,” said Carey Levine, mother of an 8th grade student.

At least two parents said they heard that a student threatened to cause harm to “a list of names” of other students. Board of Education President Steve Warner responded that he was unaware of such “a list” and encouraged parents to contact police if they are aware of it.

“When we hear bits and pieces or receive vague information we are desperate to know more,” said parent Carla Henderson.

Warner said, “We take very seriously the events of the past week. We fully appreciate the anxiety it caused our families, students and staff.”

Some applauded the school district leaders for their handling of recent events. Parent Jason Jones, who said he was in the security business, said “It’s better that some of these questions not be answered,” to prevent copy cats. “Get it together, people.”

Efforts are underway to improve wifi service in the district as well as school- to- school communications, Board members announced. A retired police officer will be hired as a full time safety supervisor beginning July 1, and the number of security cameras in the six schools will be doubled.

Shaps said that the Board will re-evaluate communication procedures “to create a clearer…set of procedures and messages when we are faced with perceived threats…not only of what to say and when but also the means we are using to engage these important matters.”

You can view the entire meeting on www.lmctv.org.

Former Mamaroneck Civil Rights Champion Honored
$2.5 Million Attempted ID Theft One of Several in Mamaroneck
Mamaroneck School District: "We Have No More Room(s) at 2 Schools"
Apollo 11 or 12? A Superintendent's Letter to Mamaroneck