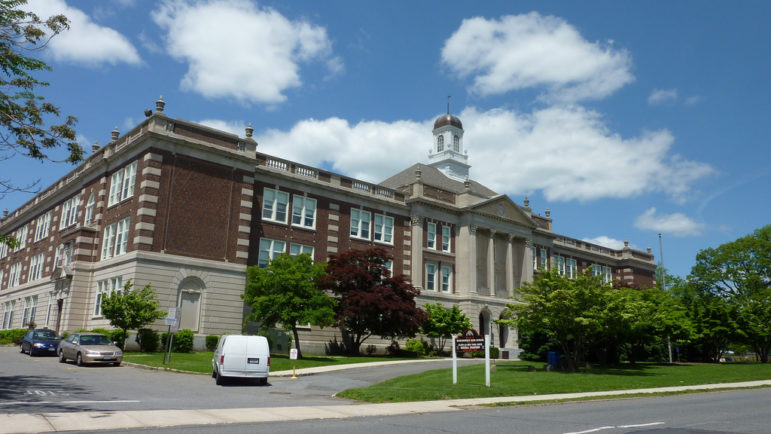 Superintendent also “not happy with the response of students or parents,” at the Middle School and High School

Stung by the on-line reaction of parents to Tuesday’s security scare, Mamaroneck School Superintendent Robert Shaps lashed out at media coverage of the incident in general and theLoop in particular for what he says was getting some of the facts wrong.

At Wednesday night’s school board meeting, Shaps laid out the time-line of events that lead to a system wide “controlled dismissal.”  It was NOT an early dismissal,” he insisted.

“We were contacted by the Town of Mamaroneck police at 2:15 telling us the alleged gunman in a fatal shooting in Tarrytown had relatives at the Larchmont Acres apartment complex, which is in close proximity to Mamaroneck High School, Central Elementary School and Hommocks Middle School.”

Schools in five towns and villages in the Tarrytown area were already in lockout because of the crime. Turns out the Town of Greenburgh had officers on a stakeout near the apartment with Town of Mamaroneck officers backing them up.  Dr. Shaps says he was worried as dismissal time was approaching.

“I didn’t want high school students wandering through the area,” he explained.  The decision was made to put the three nearby schools through a controlled dismissal “as a precautionary measure.” There was no sighting of a man with a gun as was widely reported, and police never used the term ‘suspect’.”

Gauging the immediate feedback from parents, he says he then decided to make the controlled dismissal system wide to avoid confusion including Chatsworth and Mamaroneck Avenue Schools.  Spokesman for the District Debbie Manetta took issue of our characterization of the email blasts. “There were not multiple announcements,” she said, as we reported,  “but one announcement,” an initial e-mail blast followed by an expanded dismissal order in emails with identical texts and robocalls.

Notification from: Mamaroneck Union Free School District
As a precaution right now due to a regional safety threat, we are asking that parents/guardians of Central School, Hommocks School, Murray Ave. School and Mamaroneck High School come pick up your children at school. We will be doing a controlled dismissal with police presence.

Notification from: Mamaroneck Union Free School District
As a precaution right now due to a regional safety threat (NO IMMEDIATE THREAT), we are asking that parents/guardians of all Mamaroneck Public Schools come pick up your children at school. We will be doing a controlled dismissal with police presence.

We are writing to share a bit more information about the unfolding of events today.
This morning, we learned that a woman in Tarrytown was shot and killed and that many school districts in the surrounding areas were on lockout. At about 2:15 pm this afternoon, the police informed us of some heightened concern regarding the potential for the perpetrator, still at large, to be within a specific area in Mamaroneck-Larchmont.

As a precaution to ensure that our students were not walking in the vicinity of a dangerous and armed individual, we made the decision to implement a controlled emergency dismissal with police presence at our schools. Students were either picked up by parents/guardians or escorted to their vehicles by police officers.

Please be assured that the safety of our students and staff is top priority. When we received word from the police just before the end of the school day, we needed to make quick decisions and act immediately. Although there was no immediate threat, the new information that we received at 2:15 pm this afternoon was enough for serious concern.

Notification from: Mamaroneck Union Free School District
All afternoon and evening activities are cancelled for today, Tuesday, Feb. 27.
The Board of Education meeting scheduled for this evening will be postponed until tomorrow evening at 7 pm in the Tiered Classroom at Mamaroneck High School. The Spring Sports Info Meeting will be held on Tuesday, March 6 at 7 pm in McLain Auditorium, also at Mamaroneck High School.

Shaps did tell Board members Wednesday that he was not satisfied with the way the controlled dismissal unfolded.

“It did not go well,” he told them without being specific. Afterwards he explained to us that while the elementary schools handled the situation effectively he was “not happy with the response of students or parents,” at the middle school and high school.  Some of the problems, he suggested may have been the result of a “higher level of anxiety,” in the wake of the recent school shooting in Florida.

The bottom line, though, he says, it that what happened “never approached the level of an active shooter concern.”  It was not requested by police but was simply “a precautionary decision.”

According to a Larchmont policeman I spoke with, the Larchmont police were not notified until after the decision to dismiss was made by the superintendent. As a result they had to scramble to get crossing guards and police to assist with the situation Hopefully, this will provide an opportunity to look at better coordination and protocols.

Love the spin from the school. The voice on the recorded message sounded panicked. Hommocks was a mess, it took 10 minutes before anyone told parents where to go. Not well handled. And I didn’t see any police at Hommocks.
I should say that parents should be reminded to not park in the fire zone. That’s where emergency vehicles would need to park. Thankfully not in this case, but we should remain mindful of that. I wanted to get my child too, but still found a parking spot.

Shaps’ performance on multiple fronts has been tone deaf to community concerns. I hope parents will keep these concerns in mind when it comes time to renew Shaps contract.

Chaos was also at Murray, people going in and out different doors, and custodians opening doors for parents. In a real emergency it should not be as crazy as it was. Anyone can get in with out an ID.. crazy crazy the way Murray handled poorly.

We need to look at this as an opportunity to improve protocols. As an MHS mother, I was shocked at how badly organized the dismissal was. Parents were squished outside, while the kids were packed all the way up the stairs behind the glass. It quite possible had to be the most dangerous setup I’ve ever seen. Don’t be defensive Mr. Superintendent – work with your staff and/or security consultants to improve the system.

Couldn’t agree more. It was not the parents and students who behaved badly. It was perfectly reasonable for the students and parents to be fearful given the vague content of the messages sent out. However, all of the parents and students I saw were perfectly calm and simply looking for guidance from the administration. The manner in which the children were released from the high school and middle school was chaotic at best, dangerous at worst. The high school kids were trapped and squished behind glass and the middle school kids were released to any adult who wanted to take them. Take the constructive criticism Mr. Shaps and make improvements for the next time.