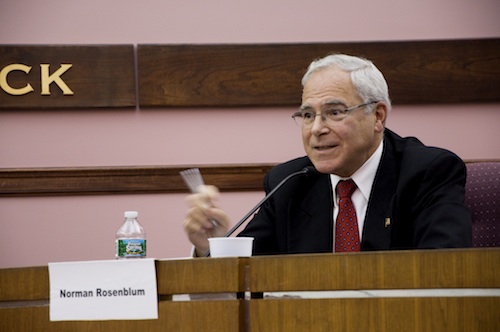 Voters in Mamaroneck may have one more choice to make on Election Day:  Two local laws would remove the Mayor’s power to appoint members of the planning board, zoning board of appeals and position of village attorney, and give them instead to the Board of Trustees.

Reports of a contentious battle over appointment powers between Mayor Norman Rosenblum and a three-member majority on the village Board of Trustees is shaping into a legal battle.

According to LoHud, Rosenblum filed a lawsuit Monday in state Supreme Court against the village Board of Trustees challenging the legality of the laws the board passed at a controversial Sept. 6 meeting.

The suit, which also names the Mamaroneck Village Clerk and the Westchester County Board of Elections as defendants, alleges the laws must be voided because the September meeting was illegally convened. Veteran Westchester lawyer Guy Parisi is representing Rosenblum in the case.

Republican Rosenblum, who is in his fourth two-year-term, is reported to have said the vote was another chapter in a long-running campaign of harassment.

“It’s a power grab and I will not be bullied,” he said.

How ironic that the mayor claims a power grab, when he is suing to prevent the VOTERS from deciding this issue. Not to mention that the proposed law is only reverting to the way it has always been, before the Mayor (without voter consent) pushed through a power grabbing consolidation of power during a lame duck session the last time the mayor controlled a majority of the Board of Trustees.

As a party to the suit I couldn’t agree more. This is the epitome of why residents of this village should turn out to vote. The irony is that he calls the board bullies when filing a lawsuit is bullying the entire village!