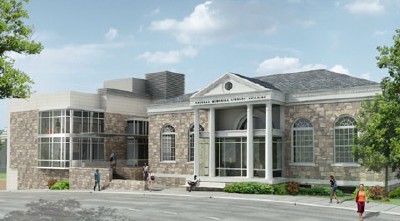 LoHud reports the newly renovated and expanded Mamaroneck Public Library has proposed a 20.38 percent tax-rate increase next year. That translates to an $80 rise in the average homeowner’s library tax bill, currently about $500.

Library officials say this is a one-time step.

To finance the new library,  $6.5 million was raised in private donations and $13 million was borrowed, to be paid off through 2034.

Consolidate (nasty word?) services of the Mamaroneck Village and Larchmont Village (+ Town of Mamaroneck) libraries. We need to be smarter about construction and use of facilities and the deployment of human capital to provide better services. Libraries will play an important but changing role in our electronically connected world. Tax paying FedEx and UPS are eating money losing USPS (a/k/a/ Post Office) for lunch, leaving taxpayers with USPS’s significant debt and lower service levels. It about doing things differently and responding to the marketplace in a timely fashion. Things change as governments watch.

The decision to separate the library from the Village budget was nade in 1991, and I seem to recall that at the time, it was touted as a money-saving proposition. As a Larchmont Village resident, I have not followed the tax increases for the Mamaroneck library budget, but a quick search of the Larchmont Gazette’s archives found there was an 11.7 percent increase in the 2004-05 budget. I’d be curious to see a year-by-year analysis, and compare that to how the tax rates for the Village have increased.