Mamaroneck Lax falls to Niskayuna, in NYS Class A Final 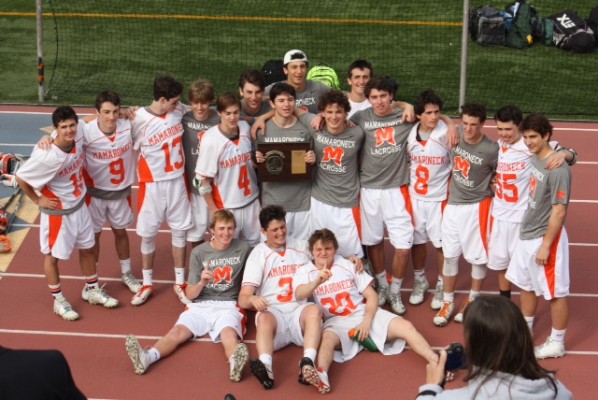 The Tigers (13-7) rallied in the second half of their quarterfinal game against Niskayuna (18-2) Saturday at Lakeland High School, but fell short in a thrilling 29 goal exchange falling 16-13 to the upstate powerhouse team that seemed clearly shocked by the resilience of their new downstate rivals.

True to form, Eric Greenberg scored four goals but it was his third scoring effort that had fans on their feet cheering: a thrilling effort in the third quarter that drew a remarkable three fouls (2 cross-checks and one slash) from desperate defenders.  Elation turned to anxiety though as the Tigers, squandered the subsequent two-man advantage by drawing two quick penalties, quickly bringing them back to even strength.

Newly named All American Reed Malas logged three goals in the effort but all the Tigers could muster was not enough to overcome the 5-goal lead The Golden Warriors established at the half.

Nisayuna’s goalie, Nick Testa, who will play for Villanova next year, is credited with keeping his team out in front with11 saves during the game, fending off repeated on-goal shots in the second half from Greenberg and Alex Ewald.

Mamaroneck has been to the quarter finals before, but this is the first time they have been so competitive with the formidable upstate programs.