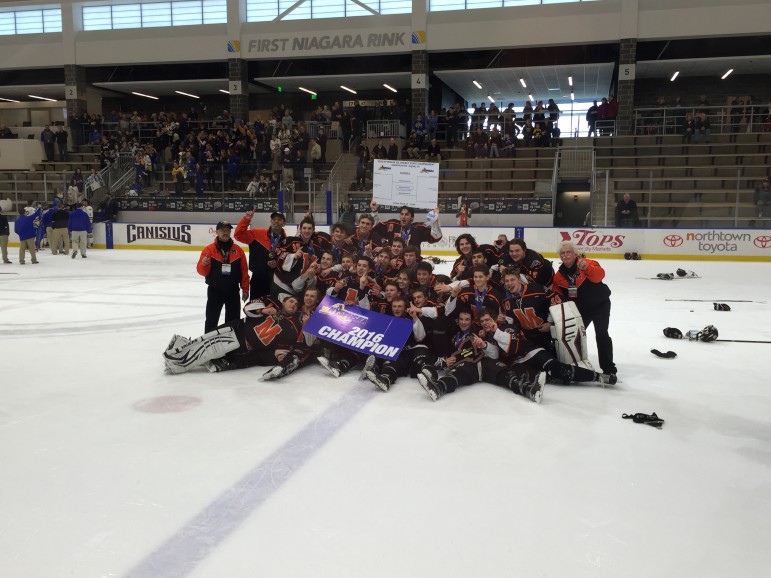 For the first time in Mamaroneck hockey history, a state championship plaque will grace the halls of Mamaroneck High School.
The Tigers defeated Section 3’s West Genesee by a score of 1-0 in an epic battle of the state’s two best teams.
The game’s lone goal came just 3:24 into the first period when Will Kirk sent a cross-ice pass to Michael Carducci who was able to deflect the puck into the back of the net.
In the second period, Tommy Spero stole the show. The junior netminder made save after save, one better than the next, to keep the Tigers both afloat and ahead. Despite being outshot 18-3 in the period, the Tigers headed to the locker room holding a 1-0 lead.
In the third, the Tigers did more of the same: cling to a 1-0 lead. As the teams lined up for a faceoff in the Tigers’ zone with 14.1 seconds left in the game, they could feel how close they were; but, as time wound down, West Genesee appeared to have finally solved Spero and score… Until they hadn’t. The refs furiously waved off what would have been the game-tying goal as the puck lay in the back of the net.
With no time left on the clock, the Tigers celebrated thinking they were state champions. What would a high school hockey game be without a little drama, though? As the Tigers lay in a dog-pile on the ice, the refs convened to determine that 0.6 seconds would be added to the clock.
So, after the team retrieved their gloves and sticks from the ice, Mamaroneck and West Genesee gathered for one final puck drop, and then the Tigers celebrated again; this time, it was for real.
Notes: Alex Ewald (2nd team), Will Kirk (1st team), and Tommy Spero (1st team) were named all-state; Kirk was also named state POY and Coach “Chap” was named state COY; Tommy Spero, Will Kirk, Michael Carducci, and Jake Levine made the all-tournament team; Tommy Spero was tournament MVP; this marks the first time a section 1 team other than Suffern (1992 and 2012) has won a state title for hockey.
First time here? Please... subscribe to our newsletter!
Welcome back! Please subscribe to our newsletter!   Just click here.

Congrats Chap… Proud to say I played for you… a long time ago.