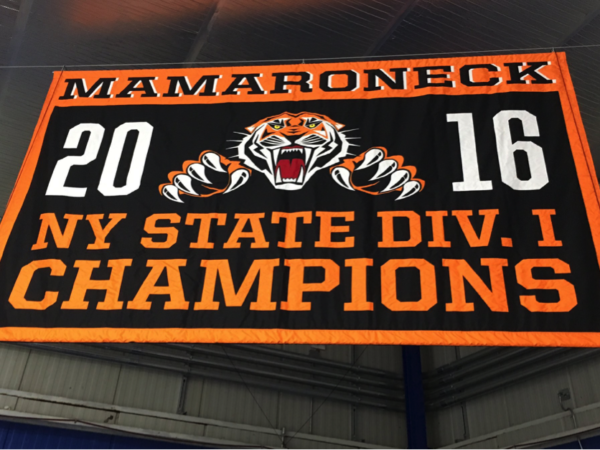 With the initial release of the New York State Sportswriters Association’s Ice Hockey rankings on Tuesday night, the Mamaroneck Tigers found themselves in a familiar place: number one.

The lauded ranking comes as a result of the Tigers coming off of last year’s state championship and their 5-0 start to this year.

After a grueling preseason regimen of 6am workouts three times per week, the team finally hit the ice over Thanksgiving weekend when it went upstate to play in a tournament. Mamaroneck mounted a third period comeback, with goals from Harrison Fried ’18 and Michael Carducci ‘18 to knock off Bethlehem (#10 in the NYS rankings), 3-2. Will Payne ‘17 also had one goal in the contest. The following day, the Tigers took care of Shaker/Colonie, 6-0, to win the tournament. Michael Carducci had three goals and one assist in the finals and claimed tournament MVP honors.

On December 2, Mamaroneck played on home ice for the first time since capturing the state title in March, which prompted a banner unveiling. In its best attempt to spoil the celebration, Rye took the Tigers to overtime; however, they would not be denied, as Jack Dente ‘17 scored a beautiful wrap-around goal (his second of the game) to ensure the night ended as joyously as it had begun, giving Mamaroneck a hard-fought, 4-3 victory. Will Payne and Connor Leblanc ’17 scored the other two goals.

On December 9, the Tigers traveled back upstate to play Saratoga, whom they defeated soundly, 3-0. Michael Carducci had two goals, Harrison Fried had one goal, and Will Payne had two assists. Andrew Gargiulo ’18 made eight saves in the shutout. The next day, Mamaroneck faced Shenendehowa, winning 5-1 to put the Tigers at 5-0 on the season. James Torre ’17 had three goals and Tommy Spero ’17 made 27 saves in goal.

With ten returners from last year’s state championship team, the Tigers know what it takes to win it all, and if the early season returns are any indication, the team should like where it is. “The start to this season has been excellent,” captain Tommy Spero said. “[It] has been fun so far, but we have to work hard as the season progresses because every team we play wants to beat the defending state champions.

Mamaroneck will have an opportunity to improve to 7-0 with upcoming home games against rival Scarsdale (Thursday, December 15 at 8:15pm) and Section 9’s Monroe-Woodbury (Friday, December 16 at 5:30pm).

“As Coach Chiaparelli preaches to us, ‘No dog piles against us,’” Spero added. “We’re looking forward to one game at a time and that’s the way we’re going to take it until we are where we want to be: on top, again.”

0 Comments
Inline Feedbacks
View all comments
Previous articleSecond Incident of Lewdness to Teenaged Girls in Rye
Next articlePetition: Bring Back the Booze to Metro North