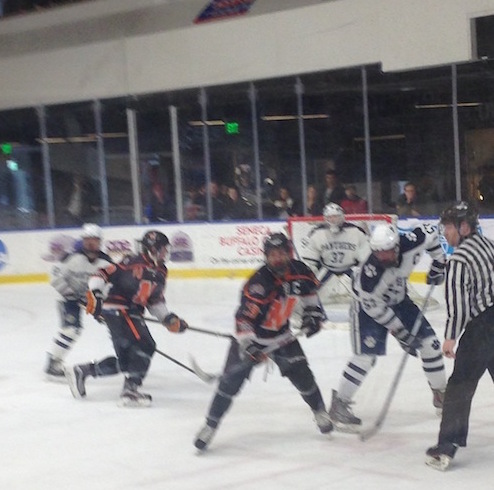 The Mamaroneck Ice Hockey team defeated Pittsford by a score of 5-2 Saturday morning at the NYS D1 Semi-Finals in Buffalo.

The 9:30am start time didn’t rattle the Tigers as they were flying throughout the game.

Alex Ewald opened the scoring with a backhand goal on the power play with 2:33 left in the first period. Pittsford tied the game just over a minute later, with a power play goal of its own, and the score was tied 1-1 at the end of the opening period.

Within the first 2 minutes of the third, the Tigers had added two more goals and, all of a sudden, were leading 5-2. From there on out, it was all Tommy Spero; the Tigers’ netminder finished the game with 38 saves, including 19 in the third period.

The Tigers will play the winner of the Saratoga Springs-West Genesee game for the State title Sunday, March 13 at 12pm.