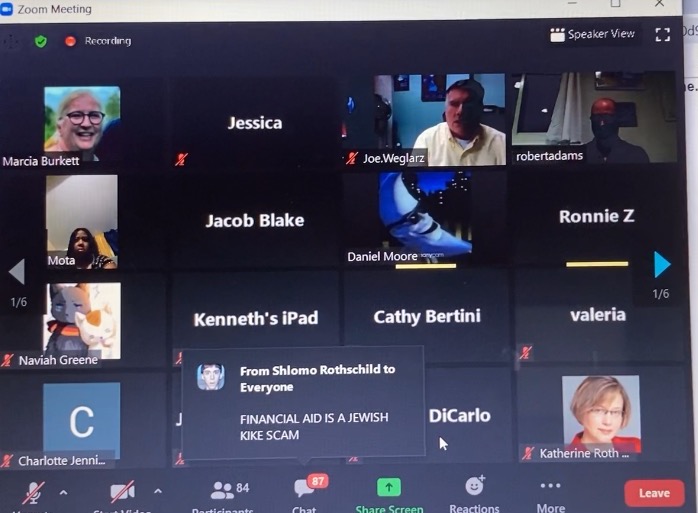 It’s one of the dangers of Zoom. “Zoom-bombers” can hack into meetings and take over a group’s agenda.
A profanity-spewing Zoom-bomber interrupted Thursday night’s Mamaroneck High School “Financial Aid For College” meeting, shocking more than 80 parents for nearly 60 seconds before the meeting was abruptly ended.
Marist College’s Joe Weglarz, Executive Director of Student Financial Services, was explaining the basics of paying for college when the Zoom-bomber, with a male voice, began his obscene rant. The intruder also also giggled.
Mamaroneck High School hosts an information session every year to help parents understand and prepare for the costs of college. Usually it is held in the school’s auditorium.
The Zoom-bomber signed-in as “Shlomo Rothschild” and wrote an anti-Semitic comment in the meeting’s chat box. He was heard ranting an obscenity aimed at one of the participants.
A short time later, the meeting re-started with a third fewer participants joining. All were muted. Meeting host Marcia Burkett, the school’s financial aid advisor, thanked those who came back and acknowledged the intrusion.
First time here? Please... subscribe to our newsletter!
Welcome back! Please subscribe to our newsletter!   Just click here.