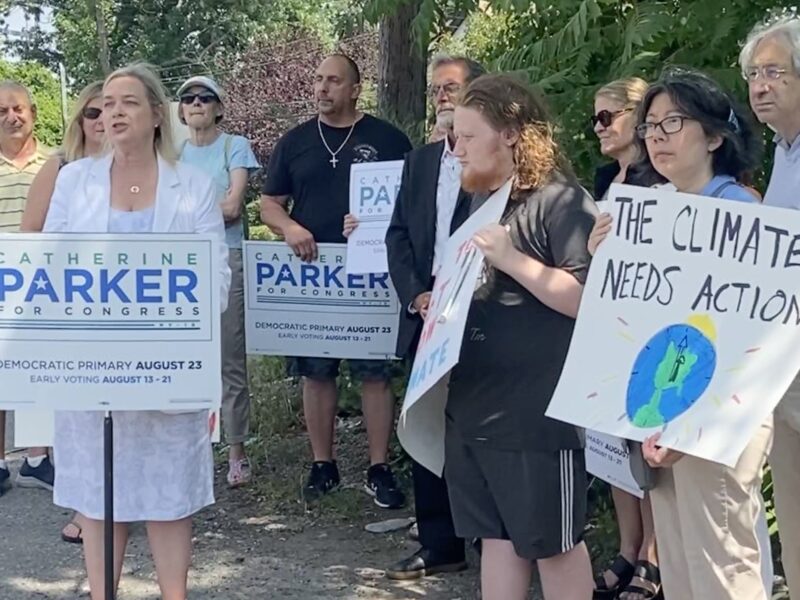 A group of Mamaroneck residents who lost their homes, businesses and  personal belongings after Hurricane Ida are hopeful that the funds in the Inflation Reduction Act will help prevent future losses in their flood prone neighborhoods.

The Act, which passed the U.S. Senate last weekend, contains $369 Billion in funding for climate change and is now headed back to the House of Representatives for consideration. Some Mamaroneck residents who are still reeling from the loss of their homes and businesses worry about political gamesmanship in the House and are urge Congress pass the measure without additional changes or delays.

Standing at the Waverly Avenue Bridge in Mamaroneck, one of the area’s hardest hit neighborhoods during last year’s September floods, Congressional candidate and County Legislator Catherine Parker implored incumbent Congressman Jamaal Bowman to “please vote with the communities that you represent.”

The plea comes in response to the the congressman’s vote against last year’s infrastructure bill which provided funding for flood prevention in Mamaroneck. Bowman claims his vote was “symbolic” at the time in holding out for other social spending initiatives.

Lilibet Kirwan, whose family was rescued by boat from their home during the last September’s hurricane, said they lost everything including life saving equipment for her disabled younger sister. She stood alongside other flood survivors “to join in raising the alarms” and make Washington take notice.

Parker also noted passage of a new legislation which she sponsored that takes effect immediately which requires for any new tenants of first floor or basement apartments to be notified of flood history of the residence.