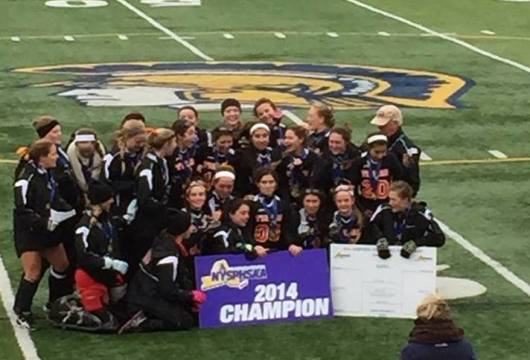 from the Journal News:

The stickhandling skills of Mamaroneck’s Ellie Seid and Liz Clarke were on full display in the Tigers’ 6-1 win over Saratoga Springs (Section 2) in a Class A field hockey state semifinal on Saturday at Maine-Endwell High School.

Clarke had three goals and Seid had three assists as the Tigers limited Saratoga’s dangerous forward core of Carley Barnes, Melisa Larkin, and Maggie Conway to few chances all game.

“We have a really strong defensive line, so we held our fort in the back and pushed out,” Seid said. “We just finished in the circle.”

Clarke opened the scoring less than six minutes into the game, getting the ball from the midfield, beating two Saratoga defenders and then beating Blue Streak goaltender Sam Geils in front.

“We were getting a lot of good balls across the midfield,” Clarke said. “I took on the two girls, pulled left and shot it in.”

Mamaroneck kept pushing possession of the ball, but Saratoga managed to get a chance in the offensive zone. With 21:40 left in the first half, Conway buried a rebound in front to tie the score.

Exactly midway through the half, Mamaroneck responded. Off of a corner, Karen Seid got a pass from Grace Fitzgerald in front and scored to give the Tigers a 2-1 lead.

Less than five minutes into the second half, Ellie Seid juked through two defenders. She didn’t get much on her diving shot attempt, but Fitzgerald was there to finish to extend Mamaroneck’s lead to 3-1.

The Ellie Seid-Clarke connection was in full effect on the next two goals. Seid stick-handled through the defenders and found Clarke on both forays to seal the game.

and from MSG Varsity:

Mamaroneck’s run to a state championship on Sunday was nothing short of dominant.

Just like it had been pretty much all season.

The Tigers pounced Sachem East 5-0 in the Class A state field hockey final, capturing the title at Maine-Endwell High School behind two goals and two assists from Gracie Fitzgerald.

Mamaroneck, which lost to Sachem East in last year’s regionals, won their only previous state title in 2004.

The entire 2014 season was a showcase of Mamaroneck’s prowess. The only defeat was a 1-0 thriller to Lakeland, the six-time Class B state champs. Mamaroneck outscored its three state tournament opponents by a 15-1 margin and allowed just four goals all season.

The loss was the first of the season for Sachem East (20-1).

“We had a great season,” Sachem star Cara Trombetta said. “It was a different experience. We were a brand new team. A lot of people doubted us at first, and we proved a lot of people wrong.”