Mamaroneck Board of Ed to Wait on Further “Improvements” 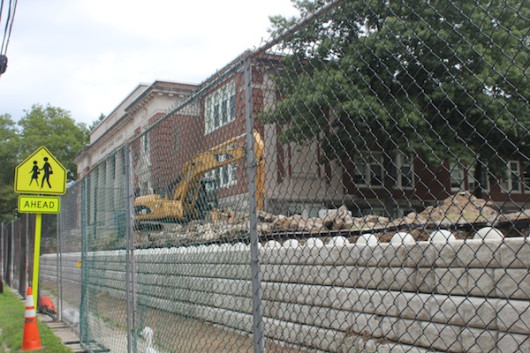 Maybe it was your comments, 100% against the changes at Murray and Chatsworth Ave. Schools, but clearly it’s the general feeling around here.

The plan to change the steps at Murray Avenue School, and the parallel project that has already forever altered the historic stone walls around at least two local early 20th Century school buildings, was discussed at the Mamaroneck Board of Education meeting Tuesday.

“The proportion of the individual blocks are too small and the rustic charm is absent. They were better suited for a retaining wall along some nameless roadway abutting an industrial park….Now there is a proposal to “shorten” the width of the auditorium exterior stair case to create more “green space” that faces Murray Ave. We are told this will help decrease the cost of repairing these steps. This will just extend that horrible retaining wall further. Wasn’t the staircase designed by the architect from 1922 and altering this will effect the form and function of the building further?”

The Board of Education agreed at last night’s meeting to hold off on making a decision about whether to replace the Murray Ave. School auditorium steps with usable green space and an extension of the retaining wall or to rebuild the steps in their original form.  The decision came after a presentation by the District’s architects and passionate follow-up discussion about the aesthetics, functionality, finances and historical significance of the stairs.

LAN Associates’ Michael McGovern explained the history of the construction work being done at Murray Ave. School this summer.  Voters had approved the re-building of the retaining wall that surrounds much of the school, as well as the steps leading up to the auditorium on Murray Ave., as part of the 2012 bond referendum.  McGovern and Meryl Rubinstein, Mamaroneck Schools’ Assistant Superintendent for Business Operations, explained the approval/bidding process that followed.  (Before a bond is approved, the District projects costs associated with the work.  Then, it is only after the bond is voted on and approved by community members that the District can legally seek and obtain State Education Department approval and then proceed with solicitation of bids.)

Rubinstein said the bids came in higher than expected. She said pricing could have been adversely affected by the short timeline required of the project (which must be completed prior to the start of the school year) and the improving economy.

“As the work was being done this summer, our contractor came to us and suggested we consider alternative cost-saving options, so we felt it was our responsibility to bring this idea to the Board and put it on the table,” Rubinstein said. “It made sense to consider the option of extending the retaining wall and replacing the larger, more expensive set of stairs, with a smaller egress staircase while the equipment was on site this summer.”

As last evening’s discussion ensued, both Board members and community members acknowledged that many people perceive the steps as the grand entrance to Murray and a historical landmark.   Board members concurred that more time is needed to carefully consider all options and obtain further feedback from the community, in addition to the State Historical Preservation Office.

At the same time, Rubinstein reiterated that doing nothing to the stairs and leaving them ‘as is’ is not an option.   “The stairs have been in need of repair for a long time.  The work to rebuild them was included in previous bonds and then taken out due to other priorities,” she said.  “They are a safety hazard.”

The stairs have been temporarily closed off.  The District will determine what additional immediate measures may need to be taken while next steps are being considered and until the Board resumes discussion on the Murray stairs in the fall.

Board of Education trustee Stanley Futterman said, “The Board has a responsibility to preserve what is valued in the community – not only what goes on in the inside of our buildings, but on the outside as well.”  Superintendent Dr. Robert Shaps praised the Board for its commitment to listen to the community, saying  “Last night’s meeting generated respectful conversation, and what’s most important is that the Board is looking at all options and took the time to ask community members to share their feelings and feedback.”

Separately, several community members expressed dissatisfaction with the aesthetics of the work done to date on the retaining wall, which also had been structurally unstable and a safety concern. McGovern and Rubinstein talked about the five different options for materials that the Building Committee (made up of Board members, community members and administration) had considered over the course of about six months.  The material that was used was presented to the Board and community at previous Board meetings and, as McGovern explained, “The block material appeared to be the best option over others that were more labor intensive and costly.  The look of the wall will become more natural over time, as the wall is weathered.  Plus, with some vines and ivy added throughout, it won’t appear as stark looking.  Many municipalities are now using this material because of its durability.”  (emphasis added.)

Personally I think the board has been more than professional in the handling of this issue. I for one like the look of the new walls, want those death trap steps repaired sooner rather than later and believe if we all vote when asked to do so on such issues true majority will rule.

“Death trap steps”. LOL. I have been here since 1958 and no child has been hurt on those steps. Please leave your neurosis back in your old neighborhood.

As far as I can see, people who voted for the bond issue expected repairs done to the existing walls.

Could the community-at-large, including residents with professional skills, such as architects, have weighed in before the change was made to tear down the stone walls and replace them with molded concrete?

While I don’t have the definitive answer, it wouldn’t appear that way judging by the outcry over the change expressed at the Board meeting.

The schools are part of the public landscape of where we live. The level of concern over the change should give you a clue that a mistake has been made.

Comments quoted above by trustee Stanley Futterman and by Andrew Francella should pave the way, I hope, to how decisions are made in the future concerning the appearance and aesthetics of our school buildings in this District.

How depressing to come back and see what they have done. There is nothing unique or charming about this wall. How did this happen?

Voters approved “the rebuilding of the retaining wall” according to the Board statement above, not its replacement.

Is the administration empowered to adopt a replacement suggested by the contractor mid-stream due to costs?

And they did so apparently without consulting the “District architects” who this article reports made a presentation at the Board meeting.
There needs to be some sort of architectural review in place to represent the Town and Village stake in the appearance of our public buildings. The architectural board of review comes to mind.

This decision was poorly made, and before further work is done, overview and public review needs to be in place.
One wonders why the beautiful stairs at Murray Ave. school, for example, cannot simply be repaired rather than replaced with inferior materials and an ill-advised design. They have weathered generations.