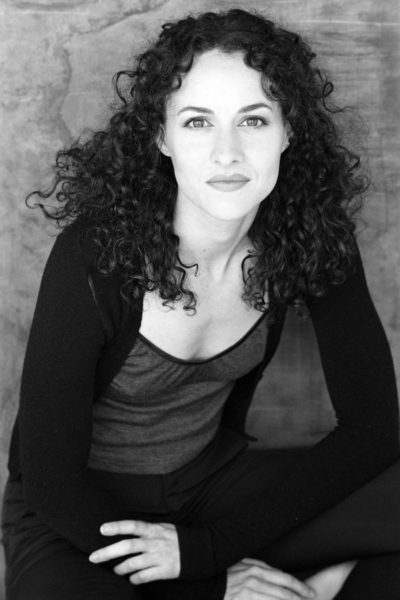 Thanks to Irvington resident DeLauné Michel Westchester has its only literary salon. Known as Spoken Interludes, it’s considered one of the best in the country.

Michel is author of two novels published by HarperCollins: Aftermath of Dreaming and The Safety of Secrets. She is an actor (Southern Gothic and NYPD Blue) and mother of two,  and created Spoken Interludes to fulfill her fantasy of the “perfect dinner party.”

Michel comes from a family of writers: her uncle was author Andre Dubus, and she is first cousins with his son, Andre Dubus III (House of Sand and Fog, Townie: A Memoir) and mystery writer James Lee Burke.   Spoken Interludes is a true gem that began in 1996 in Los Angeles, where Michel was living at the time.  It provides a relaxing atmosphere that combines fining dining with readings from best-selling authors.

The salon is held at Riverview in Hastings-on-Hudson and is catered by Chutney Masala.  The evening begins with the guests arriving from 6:00 to 7:30 p.m. for a delicious buffet dinner. The readings follow from 7:30 until 8:30 p.m.  Writers have included John Burnham Schwartz, Mona Simpson, David Denby, Arthur Phillips, Michael Korda, Marisa Silver, Arianna Huffington, Michael Connelly, Jay McInerney, Jennifer Egan, Jerry Stahl, Kathryn Harrison and Charles Bock. The evening winds down with book signing and chatting with the authors.

I met Michel for coffee in Irvington, where we talked about the inspiration behind Spoken Interludes, as well as its outreach writing program for at-risk children.

(For a listing of upcoming shows, visit Spoken Interludes)

Melina Maresca: Tell me about the conception of Spoken Interludes.

DeLauné Michel:  Spoken Interludes was a culmination of a couple different things that happened in my life.  First was my dinner table as a child.

I was the youngest of five girls.  My sisters were highly verbal and very intelligent.  The dinner table was extremely competitive.  It was intimidating for me and I adapted the role of the quiet one because I was the youngest.  It really affected me.  When I was in first and second grade, I stopped talking at the dinner table.  I literally couldn’t speak.  My mother and father would talk about their days, then my sisters would talk over each other about their days, and I simply couldn’t speak.  My parents decided to set aside time every night for me to talk and all my sisters had to shut up.  I realized later that what I’d done with Spoken Interludes is to recreate that dinner table.  Everyone is talking and eating and then they shut up and one person gets up to speak.

Secondly was my feeling that there was a real need for the sort of connection among people over literature that simply was not happening in L.A., which is where I was living when it began.  I was acting and writing there.  During the holiday season in 1995, I really missed home and all the lavish parties my family would throw.  I started having a lot of dinner parties in my tiny apartment and they were getting bigger and bigger.  I kept thinking—my parties have really great audience development (that’s the producer in me) and the question was, why?  Why are they better than most theater in L.A.?  It’s because you can eat, drink, mingle and discuss interesting topics.  The problem with theater in L.A. at that time—in the 1990s— and probably it continues today, is that there aren’t places to eat near the theaters and everything is car driven.  Everyone disperses to his or her cars so you aren’t having that group communal experience.  There is no time to catch someone’s eye, to hear other people talk about what they’ve just seen.   I’m a big believer in the primal experience of story telling.  That it fills a primal need for us as individuals in a community.  The need to have stories in our lives and having stories told to us, which is actually what theater provides for us.

Thirdly, I have a love of literature and writing.  So I thought, why not combine all three elements: writing, parties, and theater.  Add the food and drink, so people are not rushing to get to the event.  Break down the rows into tables so everyone is forced to converse with strangers.  This is what people really want.  And after everyone eats and mingles, everyone shuts up and listens to one person read his or her work.

It was an immediate success.  It was the first of its kind.  Nowadays there are all sorts of reading series in bars but at that point the only way you could see a writer was at a book signing in a bookstore or at a large lecture hall like the 92nd Street Y.  There were no readings in restaurants or bars.  I began doing two shows a month and they were immediately sold out.  In the beginning, there were no published authors—just friends who were working on short stories, one-man shows, screenplays, novels, anything really.  For a writer that’s important because you work on a manuscript for so long by yourself.   The reward of connecting with readers is such a distant experience.  I wanted to give writers a sense of that connection early on.  I would let them come in and do a 15-minute reading and see how people feel about it.

DM:    What catapulted things was when Christopher Rice—Anne Rice’s son— read in 1997.  He read a short story he was working on and with the support from Spoken Interludes he eventually turned it into his great novel, A Density of Souls (2000).  When Miramax published it, he told them he wanted to launch his book tour at Spoken Interludes in L.A.  That’s what made the New York publishing world notice that there was a reading series in L.A.  Soon the publishing companies in New York were booking their writers at Spoken Interludes.  When I moved to Westchester, I shifted the base here but I still do two shows a year in L.A.

MM:    How do you choose your authors?

DM:    My mother taught me at young age how to cast a dinner party.  You build the night around the starred couple.  Then you add a couple that knows them loosely or is connected to them.  And then you add a new couple who, because of some secondary interest, will add a spark to the evening.  A dinner party is a show.  That’s how I cast Spoken Interludes.  There are always three authors in Westchester.  First I pick a headliner—the heavy-hitting author that the night is built around.  Then I get another well-known author with solid weight, but not as big as the headliner.  Lastly, I always have a newcomer, someone exciting who brings fresh energy as a counter person to the two other authors.  Each evening forms its own special magical interaction of these three minds and stories.

MM:    Tell me about your non-profit.

DM:    My education was severely disrupted by my parents’ divorce when I was 15.  It was a horrific divorce that ended up in court.  My high school education was really destroyed by that.  As a result I have had a desire to help children whose schooling has been negatively affected by family circumstances.

I formed a non-profit called Spoken Interludes Next in 2000 in L.A. to help highly at-risk children and then I brought it to New York.  It’s funded through individual donors, grants, and corporate sponsorships.  I developed an eight week writing program where at-risk youth work in small groups with professional writers to learn how to write their own short story. The program culminates in a graduation reading for the students that family, friends, and the public attends for free.  Our goal is to ensure that the next generation receives the literacy skills they need and deserve, while providing them with mentoring in communication skills, resourcefulness, and self-esteem.

MM:    How could people get involved if they want to volunteer?

DM:    Spoken Interludes Next holds an ongoing book drive to benefit the underprivileged children at Riverside Pediatrics Clinic in Yonkers, a medical clinic that provides free medical services. Through our efforts, over 3000 books have been distributed freely to these youth, helping them enjoy the world of reading. If you would like to contribute books, please call us at 914.307.1683.  Or if anyone is interested in teaching the eight week course, please call us at the same number.