Loop TV: Beyond the Loop

Next week we premiere LoopTV’s regular talk show, Beyond the Loop.

Think of it as The View, but with real people, who, as Mary Alice says, have actually wiped peanut butter off a TV set: 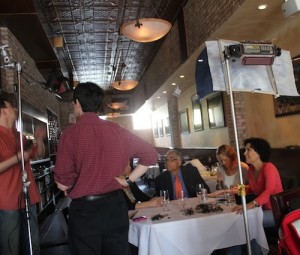 Dr. Ernest Patti of Larchmont, an Emergency Room physician and network talking head (though we do debate whether Fox News is a News Network or an Opinion Network,)

Kim Berns of Rye, a designer, and columnist for theLoop

and me, Polly Kreisman, Publisher of this site, and Executive Director of the NY Center for Investigative Reporting.

You will also meet Larry the Cameraman and some of his friends. (Our Chief Sound Technician is a 6th grader at Hommocks.)

Join us right here on theLoop next week for our pilot, taped at Espana Restaurant, where we debate such heady topics as the conflict in North Africa, the Cialis commercial with the bathtubs and knock off designer bags on Canal Street. Want to be a guest or know a good one? drop us a line at beyondtheloop@theloopny.com