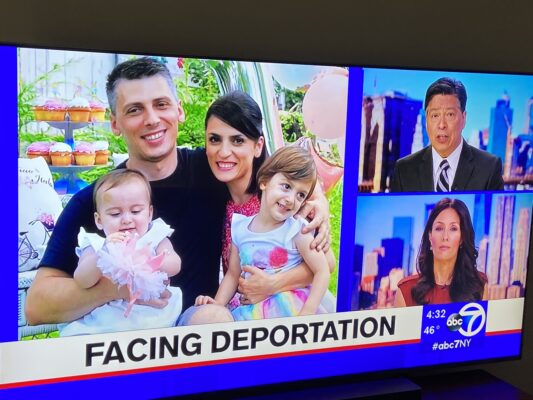 Our story about a Larchmont family facing deportation sparked an immediate outpouring of support that’s left Eduard Beqaj and Arjeta Kackini brimming with gratitude. “Five minutes after the article posted I started receiving calls,” Arjeta told us Thursday. “Within an hour other journalists had made their requests to speak with us as well.”

Wednesday, The Loop reported the story of the young couple and their two American-born daughters facing an April deportation order due to a paperwork mix-up. The family had legally been in the U.S. for 6 years when the renewal of their Albanian passports suddenly changed the expiration of their U.S. Visa and, surprisingly, turned them into “illegal” immigrants. They asked for a visa extension but were denied. The text of the order reads simply “….error, unintentional mistakes and oversight are not considered ‘extraordinary circumstances.’ As such….the extension request cannot be approved.”

Westchester County Legislator Catherine Parker was the first elected official to reach out to them, referring their case immediately to her contacts in the office of US Senator Kirsten Gillibrand.

“Arjeta and her husband have been exemplary residents of Westchester, ” she told us, “building a good business and paying taxes. To deport them because they failed to leave of their own volition during the height of the pandemic seems short-sighted and cruel. I sincerely hope that a solution can be found.”

By Wednesday evening the story had already been picked up and aired by WABC-TV’s Eyewitness News, and a reporter for the Local Westchester cable operation, News 12, called to schedule an interview as well.

By Thursday morning, inquiries had arrived from Senator Gillibrand’s office and that of freshman US Congressman Jamaal Bowman. Arjeta said she’d called Bowman’s office weeks ago and was told there was “not much we can do.” She says the story is even getting play overseas in their native Albania.

At the start of the week, Arjeta said “I was feeling lost. I was ashamed. I thought my neighbors would look at me and just see an ‘illegal.” She says she is especially grateful to the pastor and staff at St. John’s Episcopal Church in Larchmont, whose good wishes are among the hundreds of expressions of support she’s received. Today, she says, even though the future is unclear: “I have a whole community on my side.”

Facebook comments reflect a general opinion that the Kackini-Beqaj family’s problems are just another symptom of a defective US immigration system. Jamie Arsenal writes “The system is broken…This happens a lot to people who come here on temporary visas and can’t get extensions in time.”  Andres Bermudez Hallstrom summed it up simply: “There would be a lot less illegal immigration if our legal immigration system weren’t completely broken.”