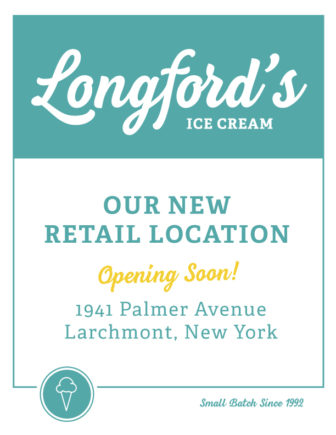 Good news, ice cream fans! Longford’s is coming back to Larchmont, possibly as early as next weekend.

Christine Santorelli, the owner of the Longford’s store that was at the corner of Palmer Avenue East Avenues (1941 Palmer Ave.) is returning as the owner at the same location again.

“We are really excited to open up again,”she tells theLoop. “Every day during construction people are welcoming us, and we are getting so much positive feedback,” she said.

In addition to its signature ice cream flavors, the store will also have a crepe bar.

Longford’s has several locations and an ice cream truck. It’s flagship location is in Rye.

Santorelli and her husband, Frankie, operated a Longford’s at the same location until they sold it to another couple in 2008. In 2012, the second owners closed the store.

Thank you for the article! Thank you to all of our loyal Longfords Customers. We are so happy to re open the doors!

Ps…. i previously owned Longford’s in 2003 with my brother Bob and Best Friend Kristy. My husband Frankie and I so excited to open the new location. :)